The drawing on the left above is a drawing of the original Club flag of Buckeye Lake Yacht Club.

It was approved along with the original Constitution (which has been amended several times) at the organizational meeting of Buckeye Lake Yacht Club. The meeting was held on Sunday, May 6, 1906 at the cottage of Mr. Charles W. Miller on Orchard Island.

The specifications were as follows: A triangular pennant, the hoist of which was to be 2/3s of the length. A blue field extended to a line parallel to the hoist 5/12s of the overall length. A field of red extended from this line to the tip of the pennant.

This burgee was the official flag of the Club until the fifth annual meeting of the Club, held 18 September, 1910. During this meeting, under “New Business,” Article III of the Constitution was amended changing the Club’s emblem and flag to those still in use today.

My interpretation of the above specifications appear in a poster paint drawing in the Commodores Lounge.

Editor’s Note: The location of Commodore Limes’ “Poster Paint Drawing” is unknown. It is assumed to be lost to history. However, today there does exist a hand-sewn replica of this original burgee hanging in the Commodores Lounge. (SGH 2008) 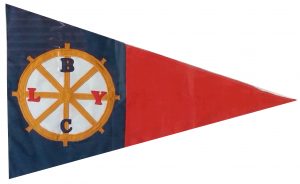