Shortly after her founding in 1906, BLYC’s officers “stormed the Inter-Lake Yachting Association’s meeting in Toledo” to make application for membership.  Although, up until that time no Club had ever been admitted that wasn’t on the waters of Lake Erie proper.  BLYC was I-LYA’s first, of now several, “inland” clubs. Now, as members of the association, BLYC’s members were eligible to compete in the annual “Bay Week” Regatta at Put-in-Bay.  This is the story of that first trip. 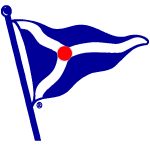 In those days, the I-LYA Regatta was a sailing regatta – this was long before the powerboating events and the Junior Regatta.  Sailors from around Lake Erie would come from all “corners” – Detroit, Toledo, and Cleveland – to meet at the Bay to compete.  The design of the I-LYA Burgee reflects this – three white bars on a field of blue, converging from the corners, to meet in the middle – PIB, represented by a red circle.

In 1907, it was decided that BLYC would be represented at the I-LYA Regatta by Commodore Charles Lynch, Vice Commodore Caleb McKee, Governor T. Ellis Minshall, and Race & Regatta Chairman Guy Sackett (Commodore 1923) aboard McKee’s sloop, Floating Debt.  She was shipped via rail from Lakeside on Buckeye Lake to Toledo where McKee, along with Commodore Lynch and a friend from the east coast as crew, sailed her to “The Bay,” where they would be joined by the rest of the BLYC contingent.

On Saturday afternoon, Floating Debt cleared her moorings at Toledo Yacht Club and out into Maumee Bay, headed for South Bass Island.  She was warned by incoming craft to turn back due to developing foul weather.  Undaunted and heedlessly, she was held to course with the same enthusiasm for which her home club was becoming noted for.

It wasn’t long until the BLYC sailors were engaged in stiff competition, not with other sailboats, but with Mother Nature herself.  As the day wore on, Lake Erie displayed her famously unforgiving nature as wind and waves grew increasingly ominous and skipper and crew grew quite weary of their increasingly perilous situation.  While it may have been advisable to return to Toledo, the crew concluded that it would be nearly impossible as a return course would put the relatively small craft crosswise to the mountainous waves and she would certainly be swamped.  The only advisable option was to hold course and ride out the storm.  So, they sailed on as dusk approached and the south shore, to starboard, faded into darkness.

Near dark, a “chilling rasp” telegraphed up the centerboard trunk and the vessel jarred to an abrupt stop – Floating Debt was aground!  Trying valiantly as they did, the intrepid BLYC sailors could not free her from whatever beach or bar upon which she was trapped.  With sheets running free, the sails slapped viciously.  Aground and battered by waves, the vessel rolled and pitched uncontrollably repeatedly rising up and crashing back down with a “freezing shudder.”  Not wanting to be splintered up with the craft on an unknown coast, the crew abandoned ship.  Somewhere between Toledo and Port Clinton, they made their way to shore through the darkness.  Bodies and most certainly egos bruised, but otherwise safe, they took refuge on a beach for the night.

Awakened by a bright sunrise, the craftless skipper and crew opened their eyes to a cloudless sky and a gentle, rolling sea.  Then, much to the crew’s surprise, not far down the beach, they spied Floating Debt lying apparently intact.  After considerable heaving and hoing and with the aid of swells, they finally got her afloat and sailed on to Put-in-Bay.  That afternoon, they hauled into the yacht-filled harbor where they were joyously greeted by a hoard of I-LYA Yachtsmen and their fellow BLYC crew, who had heard of their departure from Toledo into the teeth of the storm, and had been concerned about their unknown whereabouts and welfare.