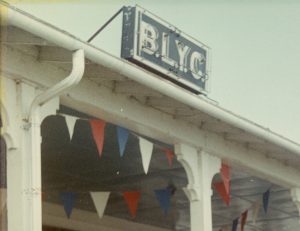 Recently, the “Y” in the neon sign on the Clubhouse roof was not working. Thanks to member Dave Kessler of the Kessler Sign Company, it is now repaired. Oddly enough, in the same time period that I was adding to my notes to remember to thank Dave in the weekly e-News, I stumbled across a bit of the history of this neon “BLYC” sign that has come to be a landmark on Buckeye Lake over the years.

Norman Yoerger joined BLYC in 1917 at the age of 18. He served on the Board of Governors in 1951 and 1952 and was obviously a very active and involved member as he received the Heber Yachtsman Merit Trophy in 1953. He operated the Yoerger Sign Company in Columbus. Started by his father, the company was one of the first in the nation to use neon lights. The company was perhaps best known for producing the massive Roys Jewelers sign, with it’s thousands of blinking lights, that once dominated the intersection of Broad and High Streets in Columbus. Reportedly, Mr. Yoerger said that the sign was too large to fabricate in their shop so he had to lay it out on the floor of a nearby dance hall.

According to the “In Memoriam” announcement in the Log following his death in 1987, Mr. Yoerger donated the first neon “BLYC” sign on the front of the Clubhouse as well as the neon cove lighting in the fireplace room and bar area. Whether or not our current sign is the original one made by the Yoerger Sign Company is not known, but from available historical photos of the Clubhouse, we know that such a sign has been a part of the Club since at least the early 1930’s.