In 1916, our Commodore was Walter L. Whitacre. This year, the Club hosted two “Tar Socials” in the off-season as was becoming the new tradition — February 20 in Newark, and March 3 in Columbus. Then Senator Warren G. Harding was invited to attend, but sent his regrets. The year of 1916 was the first real business boom the area had seen since the Club’s founding. War had broken out in Europe and Allied demands for US munitions were high. Both membership rolls and increased activity at the Club reflected this new economic situation. Following the end of the summer season, the Club’s galley was expanded and Mr. & Mrs. William Reed were hired as caretakers. For the first time, meals were now served regularly in the Clubhouse. The July 4th regatta was “unusually favorable” for both sail- and powerboats. Participation was high and new events were added for outboard motors and a new, startup fleet of sailing “dinks” — similar to modern prams like the Opti. BLYC was again well represented at the I-LYA Regatta at Put-in-Bay in July. Commodore Harry Freeman (1912-13) served as the chairman for “other sports activities” at the event. BLYC was still the only inland Club in the esteemed, “big water” organization.

As 1940 Vice Commodore Paul Holstein had been called to active duty in the U.S. Navy, 1940 BLYC Commodore Clarence E. Smith stayed at the helm for a second year. As with his first year as Commodore, Smith’s “personal and methodical focus on details, refinements, and formalities” served the Club well. While membership had waned in recent years and tough times were undoubtedly ahead, Commodore Smith was able to spearhead much needed improvements to the Clubhouse and island. Along with Past Commodore Harry Freeman, he was also instrumental in the founding of the Buckeye Lake Chamber of Commerce — beginning what has long been an active BLYC presence in the local community — at the beginning of his second term in the fall of 1940. Just after the conclusion of Commodore Smith’s term — December 7, 1941 — the World, the Country, and the Buckeye Lake Yacht Club would see many changes and rough waters ahead with the coming of World War II.

George Offenberg was our Commodore in 1966. The previous summer, BLYC was shocked by the death of long-time BLYC friend and honorary member, Bill Rosebraugh. The Club established a memorial trophy in his honor for the Most Improved Sailor in the BLYC fleet. The first recipient was Dean Volmer. Commodore Offenberg’s year began with many tragedies for the Club — Herb Smith died in an unfortunate accident at the Snowball Regatta. Shortly thereafter, long-time member and former Governor Ted Eaton passed away, as did Commodore Ken Ross (1964), a current Trustee of the Club. Later in the year, Past Commodores Robert McAllister (1948), Harold Harris (1946), and Gordon Brawley (1929) would also sail their final journey. But not all was gloomy. Up and coming young superstar in the Lightning class, Jim Dressel (Commodore 1981) would place 2nd out of 54 boats in the annual Snowball Regatta and later that year, he and Nancy welcomed the arrival of their daughter, Amy; Bill Reynolds would represent BLYC as the skipper of our team at I-LYA Junior Bay Week, finishing 3rd overall and bringing home the Shipshape trophy; Distaff membership was established for widows of members so that they might remain active at the Club; and, the BLYC Gun Club, increasingly active at the Club during the winter months, awarded its inaugural “200-shot” trophy to Commodore Chris Lambrecht (1939).

One note of interest from the year is that BLYC requested that ODNR lower the lake level 48 inches for the winter of 1965-66 so that dock and seawall improvements and repairs could be made, which they did. 50 years later, Buckeye Lake is again several feet below full pool — although not at our request.

Low water at Buckeye Lake! Jim McBride was at the helm of BLYC, and despite low lake levels due to drought, activity at the Club, and on the water, was high. Frank Foster, IV (Commodore 1998) was in charge of Junior Sailing and they had a banner year. A very successful fundraiser brought the Danger Brothers to play on Watkins Island and raised over $3,000 for the program. Two new Optimist sailboats were purchased for training and the race team was very active atI-LYA Regattas and Junior Bay Week. The “Tween the Trees” powerboat river cruise enjoyed a second successful year, members enjoyed a “Bahamas Cruise” the week after Christmas, and a charter sailing trip was taken to the Chesapeake in June to watch Commodore George Fisher (1958), along with sons Greg & Matt, compete in the Lightning Class World Championships. Later that summer, Matt Fisher brought home gold for the United States at the Pan American Games in Havana. 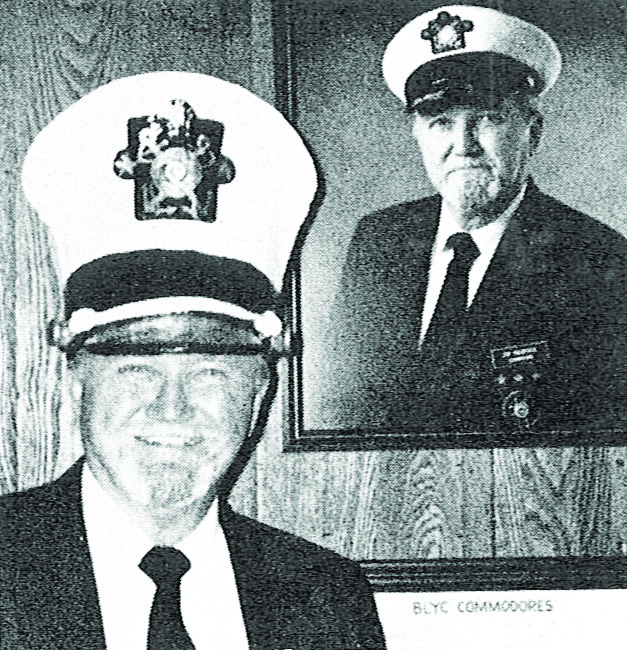 1991 was also a year with a full calendar of social activity and much needed improvements at BLYC. Drainage in the parking lot was improved, the downstairs Men’s room was remodeled, new lighting and ceiling fans were added on the porch and, perhaps most significantly, a new, wider bridge to the island was constructed. The BLYC Commodores’ Association donated the new gate at the entrance to the bridge (which will soon be refurbished and installed on another new bridge to the island.) All in all, a great season — although the Snowball Regatta had to be cancelled that fall due to low water levels.

Another year without water? On March 30, 2006, the Buckeye Lake Beacon headline read “Emergency Repairs Needed!” The article reported that ODNR would be leaving the lake levels low for the entire season so that emergency repairs could be made to the dam along the north and west banks of Buckeye Lake. Although a harbinger of things to come, fortunately for us ten years ago, it was their annual “April Fool’s” article and we were still able to enjoy our Lake in BLYC’s 100th Anniversary year.

Commodore Mark Russell led the club in 2006 and, although we had a rough start to the year with the loss of two Commodore’s Ladies – Martha Schell (Gus – 1951) and Becky Sproat (John – 1996), the tragic car accident of Fleet Captain Brett Pfahl which left him paralyzed, and the losses of Commodores Bob Walters (Oct-1983) and Chris Lambrecht (1939), there was still much excitement at BLYC as activity was on the rise and everyone was looking forward to a blow-out celebration of BLYC’s Centennial. The Centennial Committee of Commodores Fred Wright (1997), Steve Schilling (1994), Al Wing (1993), and Mark Russell (2006), along with members Michelle Desantis and Dwight Joseph assembled a plan of several events over the course of the coming summer to mark this milestone in our history.

The celebration kicked off on Saturday, May 6th with a visit to Orchard Island — the same place, date, and time of the first meeting of the Club one-hundred years earlier. Members returned to the Club for a barbeque picnic, sailboat race, and fun-filled day of activity and celebration. On June 14th, BLYC held a re-creation of the “Bang-and-Go-Back” powerboat races that were held at the Club in the early years. Six classic, wooden boats raced in front of a crowd of over 100 onlookers. The evening was highlighted with a talent show featuring the members of BLYC. The following week, a cocktail reception was held at the Buckeye Lake Historical Society Museum to unveil their new BLYC display case. A formal “Centennial Ball” was held in July with members dressing in period costume from all decades of BLYC’s history. The BLYC Auxiliary hosted an Ice Cream Social and “Family Fun Day” in August. And, the celebration was topped off with a grand “Finale” — seafood dinner and fireworks — in September. A great celebration, indeed!

BLYC Member Tony Lisska, a professor at Denison University, wrote an outstanding narrative of the 100-year history of the Club in commemoration of the anniversary and the celebrations of 2006. He, along with editorial assistance from Club Historian, Commodore Frank Foster, III (1983), Dwight Joseph, Buckeye Lake Historian Chance Brockway, and many more volunteers, assembled a wonderful book detailing many of the unique stories of the people and activities that make BLYC’s history so rich.

While the Centennial celebrations were certainly the highlight of 2006, “regular” life at BLYC continued. We enjoyed a very active summer sailing series under the leadership of Governor Don Day and the Junior Race Team, under the direction of Governor Will Price (Commodore 2009), had a very successful season as well. Commodore Steve Harris (2005) chaired the annual I-LYA Junior Bay Week Regatta at Put-in-Bay with the assistance of dozens of BLYC members who helped to make the event a success. The glass doors around the fireplace room were added, the rehabilitation of the landscaping on Watkins Island was completed, and after his term was complete, not content to rest, relax, and recuperate following a very busy year as Commodore, Mark Russell led a team of member volunteers to completely remodel the Club’s Dining Room to its current décor and configuration.