On the evening of April 24, 1906 a group of Columbus yachtsmen met at Leachman’s Chop House at Broad and High streets in Columbus and what would 11 days later become the Buckeye Lake Yacht Club was formed. Among those fifteen original members was George Francis Mooney. 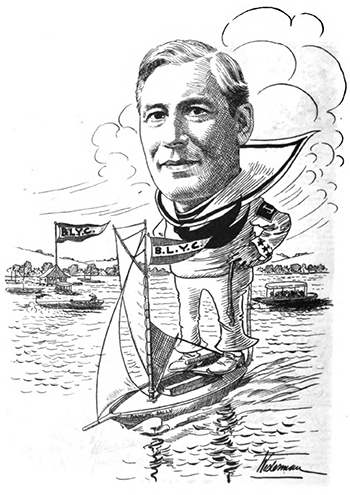 Several years ago, a caricature of George F. Mooney was donated to BLYC. It shows him sailing atop his K-boat, Dancing Sally, sailing under the “new” BLYC burgee. Further research revealed that this caricature had been drawn by famed Columbus cartoonist Harry Westerman as a part of the book “Club Men of Columbus in Caricature” published in 1911. Until recently, this was the only picture of Commodore Mooney we could locate.

George Francis Mooney was born in Steubenville, Ohio in 1867. After completing his schooling, he worked for several years teaching music, but eventually ended up working the retail liquor business in Columbus. In 1896, he purchased the Pabst Brewing distribution agency in Columbus and was very successful. In the fall of 1905, he was a founding partner of the Washington Brewing Company in Columbus and served as it’s Secretary and General Manager up until its closing, due to prohibition, in 1919. Located at 2nd Avenue & Perry Street in Columbus (in what is now the Harrison West neighborhood), no evidence of the brewery remains, the area having been converted over to single family houses years ago.

George Mooney was not just a founding member of the Club, he was also very active from the start. At that first meeting in April of 1906, Lawrence Sackett was elected our first Commodore and one of his first actions was to appoint a committee to develop a Constitution & By-Laws to govern the new Club. Mooney, along with Club Secretary Charles D. Lynch, and Rear Commodore Al Corrodi were charged with this important task. He frequently participated in the Club’s regatta’s on Dancing Sally (unfortunately dismasting in the 1906 Labor Day event) and was part of the committee established to find a location and build the first Clubhouse. He was instrumental in the effort to secure the unpaid lease on Castle Island (now part of Brook’s Beach), which was ultimately unsuccessful, and later helped to found the Buckeye Lake Building Company which then took over the lease of Colonel Wm. Wells (also a founding member of BLYC) on Sunken Island. Having served the Club enthusiastically in his efforts to build the original Clubhouse, he was elected to the Board and served as our Vice Commodore in 1910 and as Commodore in 1911. One of his first actions as Commodore, was to abandon the design of the “old” burgee, in favor of our current burgee which was much more in line with the design of other, well establish yacht clubs of the time. Under his leadership, and with his involvement and influence in the Building Company, he would finally get the ball rolling towards building a “real” Clubhouse, our current Clubhouse, for BLYC – an effort that had been talked about since the beginning and came to fruition in 1913. During his tenure, BLYC and Buckeye Lake’s greatest ally, George H. Watkins, State President of Public Works and truly the “Father of Buckeye Lake,” died suddenly of a massive stroke. Commodore Mooney established a “Watkins Memorial Committee” to appropriately honor Watkins, although it would take another 14 years until he would finally be so honored with the bronze plaque that hangs in our current dining room.

As Commodore of BLYC, he presented a silver loving cup trophy to I-LYA to be awarded in the 1911 Regatta. This Cup, known as the “Buckeye Lake Yacht Club Trophy,” won that year by Commodore W. F. Brown of Toledo Yacht Club. The cup is silver, 11 inches high overall – the cup itself stands 7” high with three handles and is 6” in diameter at the top. The base stands 4” in height with a 4½” diameter at the base.. It is beautifully preserved and displayed in the trophy case of the Toledo Yacht Club. It appears that the Cup was only awarded at the I-LYA Regatta in 1911. In 1983, TYC returned the cup to competition as a PHRF-class trophy for the annual Mills Trophy Race.

BLYC was very active in I-LYA during Commodore Mooney’s time. Mooney served on the Entertainment Committee under I-LYA Commodore Winton in 1911, and was an integral part of the Perry’s Victory Centennial Celebration committee in 1913 under I-LYA Commodore George Worthington. Later that year, Mooney was elected to the office of Rear Commodore of I-LYA. Why he never moved up the ranks to Vice Commodore and Commodore is not known.

There isn’t much information about Commodore Mooney to be found after 1925, although some sources suggest that he re-opened the Washington Brewing Company in 1933 following the repeal of prohibition. Commodore George F. Mooney passed away in 1951 and is interred at the Amaranth Abbey Mausoleum in Columbus.