Buckeye Lake was formed by the gouging, grinding, and bulldozing effects of the last of the Ice Age glaciers.  The last glaciation, which ended about 14,000 years ago, left behind a deep depression which filled in with melt water from the glacier’s retreat, forming an “infant” Buckeye Lake.  As evidenced by nearby earthworks and flint quarries, this area was part of a major transportation route for the indigenous peoples of Ohio – the Adena and Hopewell, and later the Delaware and Shawnee.  In their time, before the arrival of European settlers, today’s Buckeye Lake was known as the Big Swamp, a pond surrounded by marshy areas, not particularly habitable, and certainly not the “Playground of Ohio” that it has been in modern times. 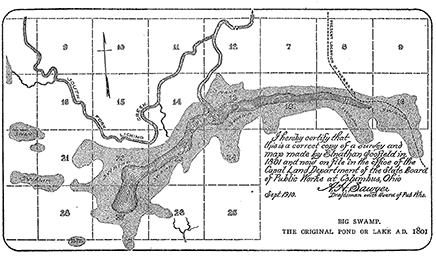 European settlement in the area began in the mid-1700s – although it was not until after the Revolutionary War that a complete survey of the area was completed.  The newly formed federal government appointed Elnathan Schofield to lay the area in plats of 640 acres each.  This land was intended to be given as reward to the refugees who voluntarily left their homes in Canada and Nova Scotia to fight against the British.  At the time, the “pond” was five miles long and about 400-500 yards across.  These plats are shown on a map produced by Schofield, signed and dated 1801.  This map was discovered in the basement archives of the Statehouse in 1910 and reproduced by A.H. Sawyer, a draftsman with the State Board of Public Works.  Sawyer’s maps can be found in Joseph Simpson’s 1912 book, A Story of Buckeye Lake, available on the BLYC website.

Today, the contour of Buckeye Lake is roughly the same as that of the Big Swamp, although it is far different in both form and function, due mainly to Ohio’s growing economy in the 1800s. In the days before railroads and interstate highways, the only reliable way to move goods was by water. The Great Lakes provided an inland waterway for shipping across the quickly growing United States, as did the Mississippi River system, which includes the Ohio. But connections between these two waterways and the east coast didn’t exist. The completion of the Erie Canal, from Albany to Buffalo, in 1823 connected the coast to the Great Lakes and provided an opportunity for Ohio to join in this new commerce and further that connection to the river system. In February of 1825, the General Assembly of Ohio passed a resolution authorizing the construction of two canals in Ohio connecting Lake Erie to the Ohio River – one of which would pass by Big Swamp. On July 4th, 1825, the first spadeful of earth was turned over at the spot now known as Taylor’s Locks, on Rt. 79 in Heath, and the canal was born. Canals have locks to facilitate changes in elevation and locks require the storage of large volumes of water. The earthen dam we know as Northbank – extending westward from “Buckeye Park” to Seller’s Point and then south to Onion and Fisher Islands – was built and the Big Swamp was transformed into the Licking Summit Reservoir.

The rapid growth of the canal system and increase in the fleet was a boon to the local economy, but it also quickly outgrew the capacity of the reservoir. An additional impoundment was created in the early 1840s. This new embankment was constructed west of the old reservoir, creating an addtional 500-acre reservoir, now designated as “New Lake” on most maps.

Lack of maintenance during the Civil War, ravages of time, and the coming of faster, cheaper transportation by railroad soon reduced canal traffic to the extent that it was no longer profitable. Thanks chiefly to the efforts of George Watkins, the last Canal Superintendent and first Director of the newly formed State Board of Public Works, in 1894 the General Assembly reserved the Licking Summit Reservoir for a public park to be known as Buckeye Lake.

In the nearly two centuries since it’s inception, many changes have been made in, on, and around Buckeye Lake. From the heydays of the amusement park and dance halls in the mid-twentieth century to the decline in the seventies to the rebirth and development of the lake over the last couple of decades to our current situation, Buckeye Lake has persevered. Throughout it all, one of the strongest forces maintaining her – despite many disturbing outside forces – has been the Buckeye Lake Yacht Club. Formed with the encouragement and support of George Watkins in 1906, the Club is, always has been, and will continue to be a leader in keeping Buckeye Lake a unique inland paradise. Our challenges are many, but our lake and our Club will survive… as we always have.