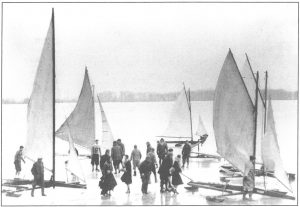 This winter, for the first time in awhile, we were actually able to get the iceboats out.  Iceboat racing is popular in northern areas – way north of here – but not all that common in our area.  That has not always been the case.  In fact, at one time, it was very popular at BLYC!

The earliest historical reference I can find is in Kyle Armstrong’s Story of the Buckeye Lake Yacht Club.  He states that the lake, in January 1910, “when frozen over… offered some good, clean, unimpedimented, ice-boating thrills.”

He also reports that in 1912, “Two new ice-boats added to the Club’s fleet had raised its total to six.  They were singing all over the Lake’s glassy-hard surface.”  In those early days, most iceboats here were “Skeeter Sayre built” – presumably a Sayre Brothers’ Marina, next door to the Club.  Zenna once told me that Sayre Brothers used to be the exclusive builder of iceboats in this area.  I’m guessing that “Skeeter” was one of the Sayre brothers?  But, “Skeeter” also refers to a particular design of ice sailer dating back to the early 20th century…. well, I guess I need to do some more investigation.  Those craft were steered from the stern like most “soft-water” boats – unlike the bow-steered iceboats we see today.  Iceboating continued in earnest at the Club, as conditions would permit, for many years.  I have seen a number of old photos from Past Commodores Lambrecht and Schell showing several DN iceboats lined up for a race.  According to Armstrong, in the mid-twentieth century iceboating was a regular part of the Club’s racing program! 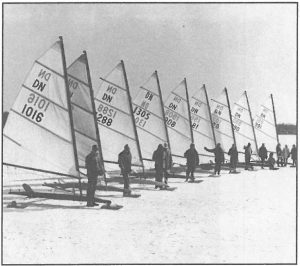 Either winters were colder then, or Buckeye Lake yachtsmen were much braver.  Our history records are peppered with stories of iceboating at Buckeye Lake in the early days of the Club – including one from Frank H. Miller, long-time BLYC member and P/C of Put-in-Bay Yacht Club and I-LYA, in which he recalls the 1917/18 iceboating season ending “with Sid Allen sailing an iceboat on soft, floating ice with Max [Slaughter] and I sailing alongside in his canoe.  Nobody thought to take a picture.”

I’m not sure that our BLYC iceboaters today are that bold.  But, from time to time, we are able to get out on the hard water and scream along the nearly frictionless surface for a thrilling ride – followed, of course, by a rest inside the Clubhouse to warm up, share stories, and have a drink or two enjoying the company of our fellow BLYC members.  Isn’t that, after all, really the most enjoyable winter activity at our Lake?