There’s been a lot of talk lately about the dam remediation project and access to our island. Obviously, we lost our bridge a couple of years ago when the contractor came through with the stability berm. We have a temporary bridge for now, but when will we get a new bridge and what will it look like? We all became accustomed to seeing our entrance with the large, black iron gate donated by the Commodores’ Association several years ago, and the long, wide concrete walkway leading to the island. The new one will most certainly be different, but the entrance has changed many times over the years. When it’s all done, I’m willing to bet that new one will, likewise, present a grand entrance to BLYC.

The following article appeared in the May, 1985 issue of the Log — written by, then Historian, Commodore Frank Foster — describing what was likely the first bridge to Watkins Island… 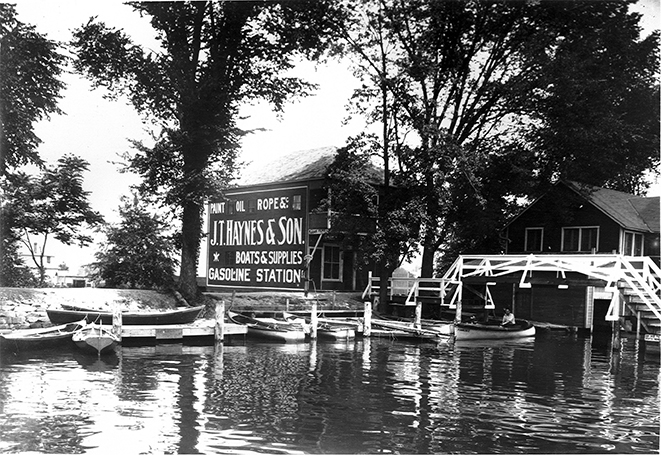 You are standing on the north side of the island where there will be a Laser dock. You look to the northeast, past the bridge to the cottage to be occupied by Commodores Mike Hein and Bob Dye. But they are not there yet and there is no Laser dock. The year is about 1911. Their cottage was there, but they weren’t. Alice Rosebragh was there, as a little girl. She told me that she had some pictures and rembembered playing on this bridge as a little girl. I stopped by and talked with her briefly and hope to do so again. She is a lovely lady with an interest and knowledge of Buckeye Lake history. This picture was loaned to me by Warren Wyant.

Alice reports that, as a little girl, she lived in the same house which she now lives in at the entrance to the parking lot. That house is visible in the background of the picture. She and her friends loved to go over this bridge and climb up and down the steps. She said that the fishing was very good in the water that you see in the picture. However, that was before the steel retaining wall.

Can you see the gas pump right in line with the near corner of the marina? She has a picture taken from the opposite side of that gas pump showing the operators at the pump and in the background showing the edge of our island. The island was rounded and, of course, lower since this was before it was raised. The lower concrete wall was there but, of course, the lift and the finger adjacent to the lift were not.

How do you suppose gasoline was delivered to Sayre’s Marina and the other marinas around the lake? Well, Alice says that at one point it was delivered by gasoline boat and yes, she has a picture. Along the bow it says The Standard Oil Company. A relative of hers went to Thornport and filled five gallon containers which he loaded into the boat. He then delivered them to the marinas.

Notice the small boats with the small motors in the picture. Alice tells me this was a principal means of transportation around the lake along with the railroads. She recalls as a little girl taking a trip to Millersport by railroad and the thrill of coming back through the lake by such a boat.

You can see a portion of the stone towpath retaining wall. The same wall is still visible in front of Eastport, although the top portion was knocked off by the State. The marina of J.T. Haynes and Sons is clearly visible. Mr. Haynes was a member in 1906 and his name is listed in the 1906 directory which I published in an earlier Log. It stood right on the lot now owned by the Yacht Club across from the bridge. It appears to be of the same vintage as the current shop of Sayre Marine. I will need someone else to tell me the kind of boats I am looking at.

(Editor’s Notes for 2018: Many of the landmarks mentioned by Commodore Foster are no longer present – the Hein/Dye cottage, the Laser dock, and the lift for example. Alice Rosebraugh’s house now belongs to BLYC. Commodore Foster’s handwritten notes and other photos in the archives suggest that the boats in the picture are Mullins Steel Boats which were made in Salem, Ohio and very popular in the early 20th century)