Our Club, like many, is adorned with a wide variety of historical pictures, plaques and trophies.  For most of us, they’ve become so commonplace that we walk by with little thought as to their significance.  One, which I’m sure we’ve all seen, hangs in the dining room and reads as follows…

IN MEMORIAM HON. GEORGE H. WATKINS PRESIDENT STATE BOARD OF PUBLIC WORKS 1906 – 1910 ————– ERECTED BY MEMBERS OF BUCKEYE LAKE YACHT CLUB AND OTHER FRIENDS IN MEMORY OF HIS SERVICES AS THE FATHER AND PROMOTER OF IMPROVEMENTS AT BUCKEYE LAKE 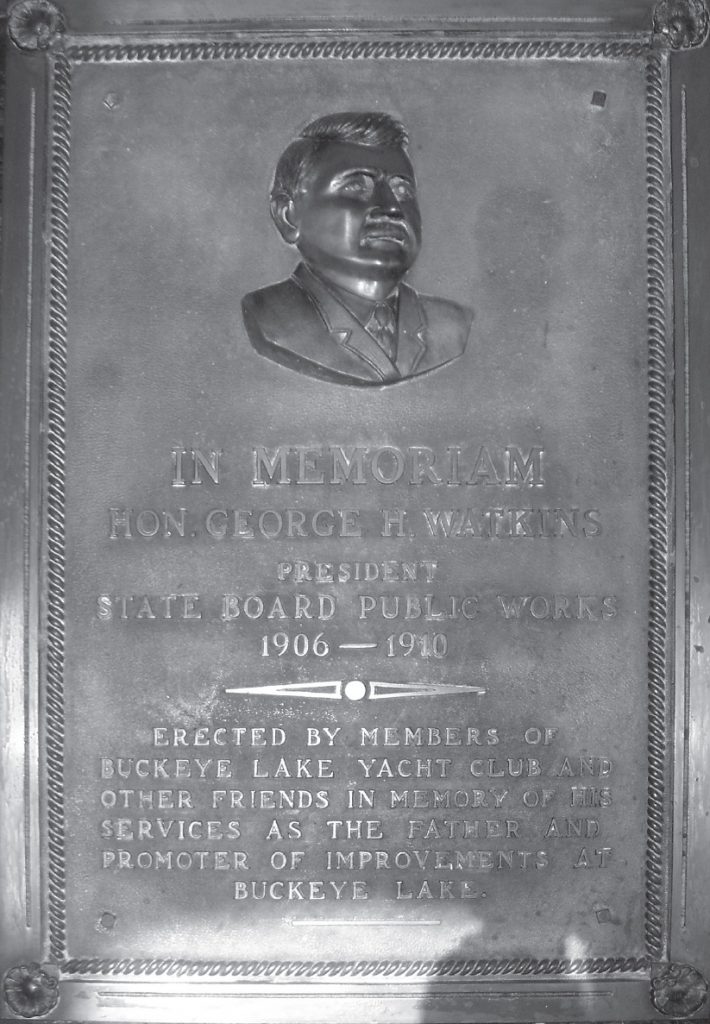 But, other than that small memorial description, who was George Watkins? Why did BLYC honor him by naming our island after him? 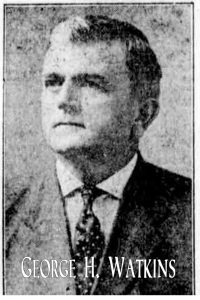 George Watkins was a canal man. Born and raised near Portsmouth, Ohio, he spent much of his career working on the Ohio-Erie Canal, eventually becoming Canal Superintendent. The last canal boats passed through what was then the Licking Summit Reservoir in the late 1890’s and the former canals and reservoir became a hodge-podge of semi-public water supply, waste disposal, and flood control. In 1906, Watkins was elected President of Ohio’s State Board of Public Works. In addition to other duties, he was charged with the maintenance of over 300 miles of the former canal system and it reservoirs – much of it in disrepair – including the Licking Summit Reservoir. Fortunately for Watkins, he found an enthusiastic group of Columbus businessmen who wanted to form – of all things – a yacht club in central Ohio… and he knew just the location! As the founding members of BLYC set to work writing by-laws, building a clubhouse and establishing themselves as a “real” yacht club, Watkins used his influence in Columbus to spur improvements at what had now come to be known as “Buckeye Lake.” Throughout the Club’s early years, state workers replaced the old, wooden waste-weir with one of concrete, returned locks, sluices, and gates to serviceable condition, removed many underwater hazards, and repaired considerable portions of the north embankment. To the delight of the fledgling yacht club, the old reservoir was quickly becoming a real lake. Over the coming years, further improvements at the lake brought both Club members and visitors alike. Buckeye Lake had become a destination, the Club prospered and all due to the improvement efforts of “Uncle George” – as he had come to be known. As he usually did, Watkins addressed the BLYC membership at their annual “Tar Social” in the winter of 1908. He talked “interestingly and entertainingly” about the Lake and its improvements, accomplished and contemplated. He reported that boat registrations at the lake that year had resulted in revenue of over $6000 – quite a lot in those days – which would be used for maintenance and improvements in the coming year. At the conclusion of his talk, the members, overjoyed with his report, called a spontaneous, resounding, unanimous vote declaring that the Club’s once-watery real estate of Sunken Island should be renamed “WATKINS ISLAND.” In 1910, Watkins was again a candidate for the Republican Party’s nomination for re-election to the state’s Board of Public Works. In their appreciation for all he had done for Buckeye Lake and the Club, a sizeable delegation of BLYC members assembled at the Statehouse on July 26 to rally for “Uncle George.” Exhibiting their colors and sentiments, these BLYC mariners marched out across the capitol’s west concourse to their chant of “We-Want-Uncle-George-We-Want-Uncle-George…” Crossing High Street, the procession halted traffic… In the old Neil House, these boosters for Uncle George passed out cards… and pinned Watkins badges on delegates and visitors. None, there convened, was left unapprised of Watkins’ candidacy and qualifications… Needless to say, Uncle George was nominated and, ultimately, re-elected that fall. Such was the admiration and appreciation BLYC had for George Watkins. Over a period of a few short years, George Watkins had transformed a dilapidated, murky, muddy, barely-navigable canal reservoir into a vibrant, active lake community. Unfortunately though, his leadership was not to continue.

On February 3, 1911, BLYC held its sixth “Tar Social.” Noticeably absent however – for the first time – was “Uncle George.” Just 5 days previous, he suffered a stroke at his home in Portsmouth. He passed away on February 8, 1911 leaving a legacy of improvements that made our Lake and our Club possible. Improvements which we still enjoy today. On Friday, July 3, 1925, a group of Mr. Watkins’ friends, along with yacht club members, dedicated our island to his lasting memory with the “imperishable bronze tablet” that now hangs in the dining room: George H. Watkins – (a) member and lover of the Club, friend of the common people, (who) departing, left to them in Buckeye Lake a beautiful and valuable heritage to which his spirit invites us to return again and again to enjoy the fruits of his labors.