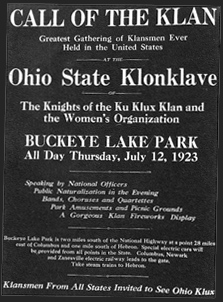 The Lake that most of us know as a peaceful and tranquil respite from our busy lives also has several dark spots in its history. Buckeye Lake was established as a watershed for the Ohio Canal, built beginning in 1826 from a marshy area that Native Americans called “The Big Swamp.” With the demise of the canal age for travel in the late Nineteenth Century, George Watkins — after whom Watkins Island is named — was instrumental in getting the reservoir donated to the State of Ohio for recreational purposes. The interurban line from Columbus to Zanesville then constructed a spur line from Hebron to the Lake and assisted in establishing the amusement park. The flatlands of central and northeast Ohio and most of central and northern Indiana served as easy land for the construction of interurban rail tracks. It was this massive interurban system that provided the means of transportation to the Lake from a wide catchment area. Among those taking advantage of these trains were members of the Ku Klux Klan. The Ohio Electric Company even ran special cars to transport the Klansmen and women — called “Camellias” — to Buckeye Lake. 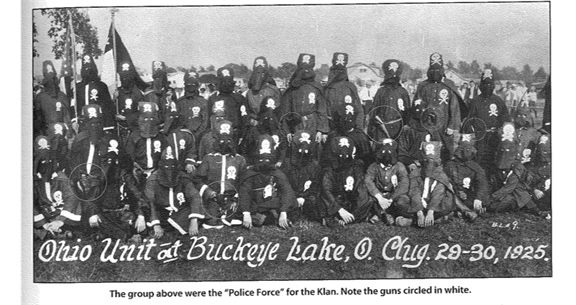 The Ku Klux Klan experienced a second major revival in the early twentieth century, and by the 1920s Indiana and Ohio were burgeoning areas for recruitment. The Klan was especially influential in state governments. During this time, the Indiana governor was a Klansman and locally the mayor of Newark wore the hooded white robes and masks. The “Grand Dragon” of the Indiana Klan, D.C. Stevenson, had a summer home at Buckeye Lake. Under Stevenson’s leadership, in 1923 and 1925 two large Konclaves were held at Buckeye Lake. The 1925 gathering was billed as the “largest Konclave in the United States,” with estimates of nearly one hundred thousand persons attending this second event. While these attendance numbers might be inflated, nonetheless the shores of our peaceful lake served as a massive meeting ground for this quite toxic organization. National speakers dominated the KKK platforms and even Klan marriages were performed on the shores of Buckeye Lake.

While certainly not a pretty picture historically, these two Konclaves were significant yet now largely unknown historical events. Stevenson was eventually charged and convicted with manslaughter of a young woman he kidnapped and drugged; he was sentenced to life in prison. Likewise the Indiana governor and the mayor of Newark were indicted on corruption charges. With the leadership largely undergoing serious legal problems, by the end of the 1920s the influence of the Klan withered away to almost nothing. There is no historical evidence that the Yacht Club was involved with this eyesore, although one might surmise that some members of the Club were associated with the Klan.

The author acknowledges the exquisite proofreading skills of Marianne Lisska.

We are very grateful to long time BLYC member Tony Lisska for contributing to this month’s edition of the Log. Among many other accomplishments, Tony is the author of An Illustrated History of the Buckeye Lake Yacht Club: A Narrative of the Origin and Development of the Club through its First Century: 1906-2006, written in celebration of BLYC’s Centennial. He has also been a much appreciated and invaluable resource to your historian in our efforts to preserve the rich history of our Club and the Lake.