Each year, Toledo Yacht Club hosts the Mills Trophy Race, one of the oldest and most prestigious sailing contests on the Great Lakes.  As a part of their annual program, Toledo Yacht Club Historian, P/C Ron Gabel, writes an article about one of the 50+ trophies presented for the race.  In 2010, the featured trophy is the Buckeye Lake Yacht Club Trophy.  The text of his article is reprinted with permission below.

CLICK HERE for more information on the Mills Race

INTRODUCTION This is a short narrative on the Buckeye Lake Yacht Club trophy won 99 years ago by the sailing yacht “Bones” of the Toledo Yacht Club at the 1911 Inter-Lake Yachting Association regatta at Put-in-Bay, Ohio. 1911 I-LYA REGATTA 1911 was the 18th I-LYA regatta held on July 22 to 26 at Put-in-Bay.  187 sailing yachts were registered with I-LYA in 6 different racing classes.  i.e. 21, R, 18, 16, 14 foot.  The sailing yachts sailed a windward and leeward course in a West – South – West 10 MPH breeze. An estimated 200 motor yachts attended the regatta and were anchored in the lagoon and bay.  Many of the sail boats made the journey to Put-in-Bay under sail while others were towed to Put-in-Bay as  Commodore S.O. Richardson or T.Y.C. did with “Old Sam” behind his 90 foot yacht Jessamine. Four trophies along with regatta flags and cash prizes were awarded.  The four trophies and winners were: Regatta flags were awarded in each class for the 1st, 2nd and 3rd place finishes. Cash prizes ranged from $60 to $150 for a 1st place finish and $25 to $90 for a 2nd or 3rd place finish. RACE RESULTS VIA PIGEONS The Toledo newspaper “News Bee” provided the only daily race results from Put-in-Bay to Toledo by launching 6 homing carrier pigeons after each race.  The 6 birds flew the approximately 44 miles course within 1 hour and 10 minutes.  The first pigeon arrived in only 49 minutes averaging nearly 54 miles per hour.  (Tailwind?) TROPHY The face of the trophy is inscribed:

The second quadrant is inscribed:

The trophy is silver and has a registration number of D25.  She stands overall 11 inches high, the cup is 7 inch high with a 6 inch diameter top.  The pedestal is 4 inches high with a 4 1/2 inche base and three handles. The 99 year old trophy is preserved in excellent condition at the Toledo Yacht Club archives. 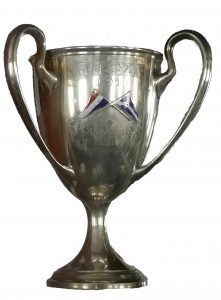 I-LYA AND BLYC The Inter-Lake Yachting Association was founded in 1885 by three prominent yacht clubs of the day, Cleveland Yachting Club, Detroit Yacht Club and the Toledo Yacht Club.  In the early years of the I-LYA, membership was somewhat limited to yacht clubs boarding the Great Lakes or its tributaries.  At the December 1906 fall meeting of the I-LYA, Buckeye Lake Yacht Club applied for membership even though she was located on the inland Buckeye Lake.  Past Commodore George Worthington (1885) of the Cleveland Yachting Club supported the BLYC request and pointed out that Buckeye Lake was connected to the Great Lakes via the tributaries of the Ohio and Erie Canal system.  Commodore John H. Craig of T.Y.C. was the standing Commodore of I-LYA in 1906.  BLYC was admitted to the I-LYA in December 1906 – 104 years ago. Buckeye Lake Yacht Club is located on Buckeye Lake State Park some 35 miles East of Columbus and just South of Newark off I-70.  She is a member of I-LYA, US SAILING, and American Yacht Clubs. POST SCRIPT After the intial challenge in 1911, the Buckeye Lake Yacht Club Trophy was apparently retired from competition.  In 1983, the trophy re-entered competitive sailing as a PHRF class trophy in the Toledo Yacht Club Mills Race. Today, the Buckeye Lake Yacht Club Trophy is awarded for the Best Corrected Time on the Presidents Course, PHRF K class. This year, 2010, will mark only the 26th challenge for this nearly 100-year old trophy. P/C Ronald M. Gabel TYC Historian     TOLEDO YACHT CLUB TROPHY WINNERS PROGRAM BUCKEYE LAKE YACHT CLUB No. 16