Tornados are a way of life in Ohio and Buckeye Lake and the Yacht Club have not escapted.  Comm. Kyle Armstrong in his book, The Story of Buckeye Lake Yacht Club, recounted the 1928 tornado.  Fortunately, photographs also exist which I obtained a couple of years ago from Buckeye Lake historian Chance Brockway.  I have placed them in the history display cabinet in the Commodores’ Lounge along with the complete, relevant excerpt from Comm. Armstrong’s book.  Of course, his entire book is always available for reading in the Commodores’ Lounge.

A brief synopsis of the events taken from Comm. Armstrong’s book follows:

Sunday, June 17, 1928, was hot and humid, but not unbearable to those at the lake.  The following day, Monday, not many people were around the yacht club, then, as now.  From morning through mid-afternoon it rained steadily, then it let up and a grey overcast appeared with almost no wind.  To the north a big black cloud loomed on the horizon and to the southwest a white one of apparently equal volume appeared.  The apparent impact seemed to set them spinning into a single, swirling, funnel-like mass with a whipping spout.  Roaring and hissing it came up the tow path, knocking over trees and buildings and lifting cottages from their foundations.  Within three minutes the tornado had come and gone, leaving damage behind.

Along with nearly 1500 feet of almost wholly demolished tow path property, the club’s premises were a mess.  A roofless two story cottage was left grounded in a nearly upright position in the lake just off the club’s beach.  (Yes, there is a photo.)  The back channel was a sea of debris and uprooted trees which had tumbled in from all directions.  Boats in the back channel slips next to the island were covered with litter, but most of them were still floating.  The island was strewn with rubbish.

On the club house, roof coverings, sheeting and rafters were completely gone from the north end of the boat house and most of the south side of the club house.  There was nothing left of the front porch above its floor line, excepting rails, posts and beams, to east of its front steps.  Inside much of the club house and furnishings had been thoroughly drenched.

See the pictures of exactly what Comm. Armstrong described in the Commodores’ Lounge at the club.

Here are pictures that are likely the ones that Commodore Foster refers to in his article – two of which are currently on display in the Library upstairs in the Clubhouse. 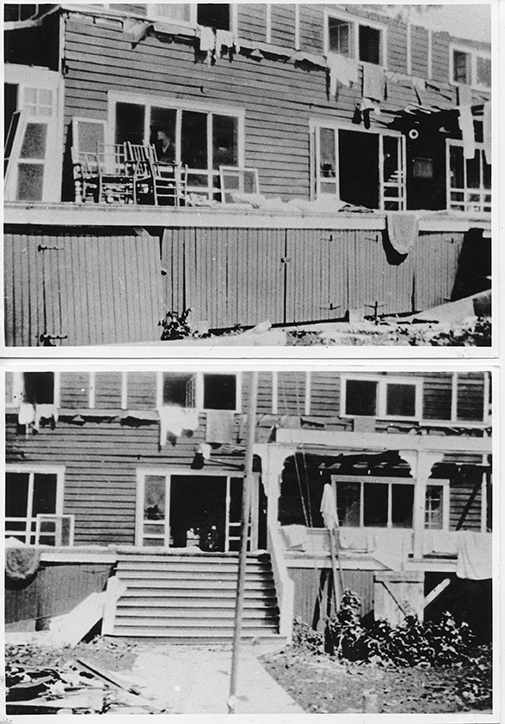 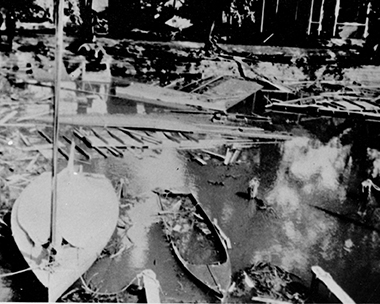 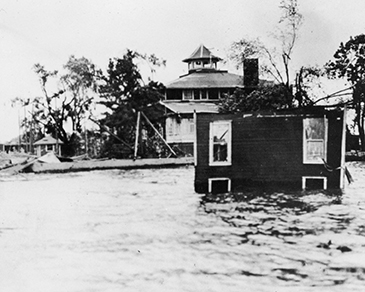 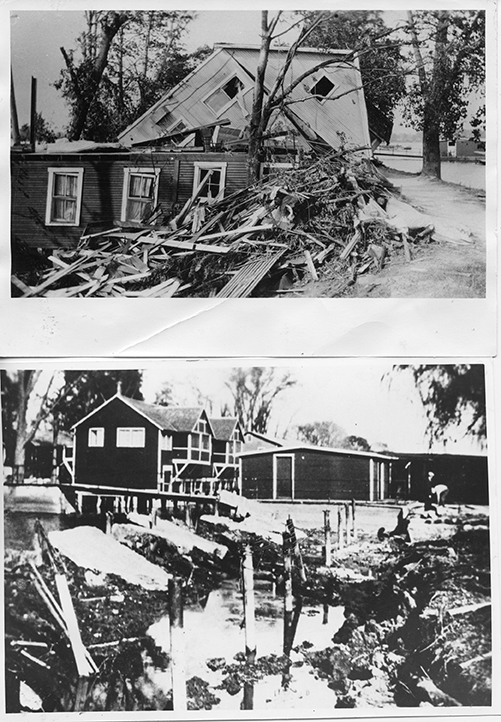