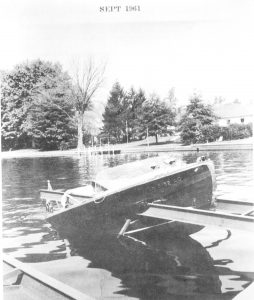 A TYPICAL POWER BOATER.  (I couldn’t resist)  We sailors love to say nasty things about power boaters regardless of whether or not we believe them.  Many thanks to Bud Sayre who loaned the picture to me for publication in the Log and told me a bit about it.  But first, a little quiz.  Do you think you might know whose boat this is? . . . . . . WRONG!  It’s not Commodore Boehm, Don Hardy, or Ed Levison, so right away I have eliminated the obvious 99% of your guesses.

However, in 1961, this poor fellow, who was not a yacht club member, had overindulged in alcoholic beverages and went for a boat ride on Buckeye Lake at what must have been a high rate of speed.  Suddenly, as you can see, he was no longer travelling at a high rate of speed but instead was impaled on two large steel beams being used to construct docks.  Bud reports that there were two occupants and they were sitting on top of the back of the seats and therefore escaped being killed.  AND NOW, THE REST OF THE STORY.  As surprising as all of these events were, there is yet a more amazing part.  Believe it or not this boat was repaired by Sayre’s Marina and continued to be used on Buckeye Lake for at least another 10 years.