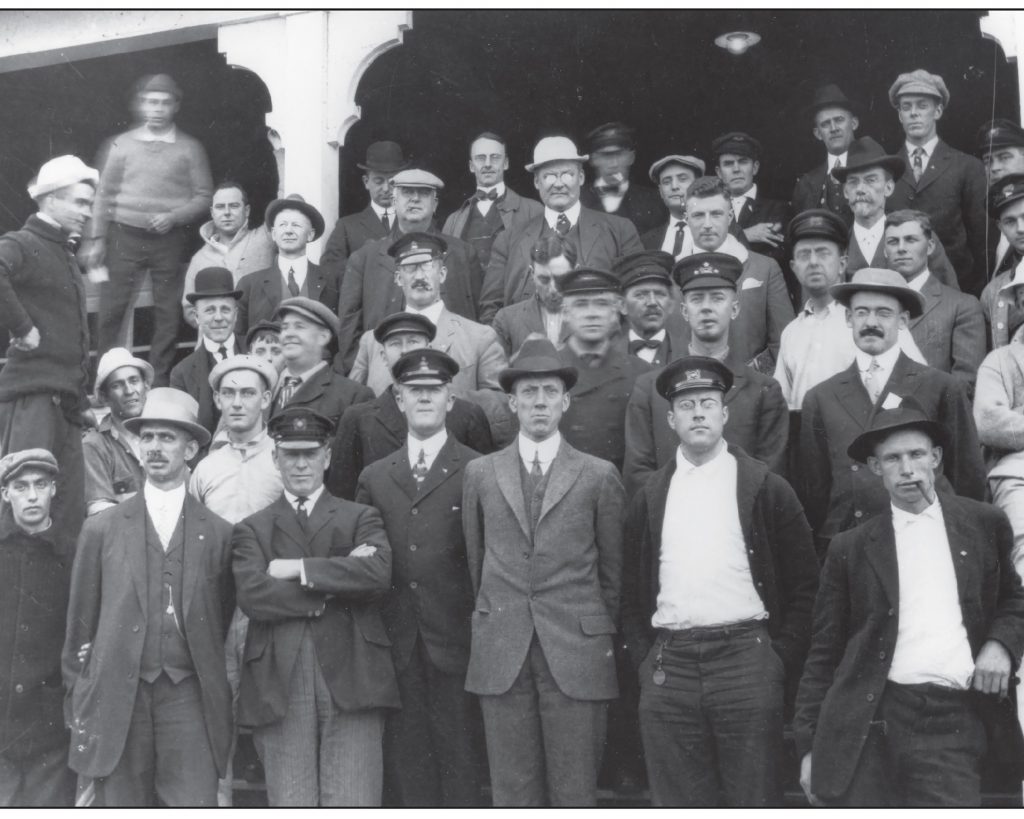 Many things change a lot, but some stay the same.  How many group pictures have you seen taken on the front steps of BLYC?  Among the many pictures that the club history department purchased from Chance Brockway last year is this picture showing members gathered on the front steps.  I would guess that this picture was taken some time after 1913 whn the present clubhouse was completed and the early 1920’s.  If I am lucky Frank Miller will look at this picture and send me some names.  The face in the lower left corner of the young man looks familiar, as if I have seen him on other pictures, but I cannot tell who it is.

A comparison of these faces to those past board members and Commodores in teh pictures in the Commodores’ Lounge makes the recognition of three faces obvious.  Just to the right of center is Commodore Larry Sackett who was Commodore in 1906 and 1920-21.  He is the only person in the picture with three stars.  That is clue number 1 as to the date of the picture.

Almost in the front row and just to the left of center wearing a yacht club ap and appearing to have one star is certainly Harry Holbrook.  What appears to be a single star is a clue to the date since he was Commodore in 1914-15.  In the dead center and somewhat blurred, appears to be Harry Freeman who was Commodre in 1912-13.  It is difficult to tell but he appears to have at least two stars and possibly three.  The man just to the right of Harry looks like Jeff Wagner, but I know that can’t be unless Jeff is immortal.  Several other faces look as if I have seen them in other pictures, but I cannot place them.  Perhaps there is someone else who can help.

In view of the people who I can identify, the starts on their hats, and the similarily of their ages to those in the pictures in the Commodores’ Loung, my best guess is that this picture was taken in 1913 in connection with an opening or completion of the new club house.

The gentlemen appear dressed for cooler weather and thus perhaps this was the annual meeting on Sunday, September 22, 1912 which was noted by Kyle Armstrong on page 77 of his book.  On the other hand, it could be a meeting of the Buckeye Lake Building Company Stockholders, the company used to finance the house, on June 22, 1913.  Kyle Armstrong says that the club house was officially dedicated on May 4, 1913, at the first formal function held within its walls.  These folks don’t look all that formal.

In any event, the next time you stand on the front steps, think of all those members of the club who have stood there over the past 75 years and had their picture taken.