Commodore Claude McGinnis moved to a rest home recently.  Mac was Commodore of BLYC in 1963.  His daughter told my son Frank that she had some things of interest  to the Yacht Club which I picked up on behalf of the Club.  She gave me several old directories and the original plans for the steel dock in front of the Club.  She said that Mac was in charge of docks when that was built.

She reminisced about ice boating on Buckeye Lake with Frank Miller when she was a child.  She said Frank and his wife would come to ice boat at Buckeye Lake and stay at Mac’s house.  This must have been in the mid 1950’s.  If I am lucky, Frank will tell me more.

As a coincidence Frank Miller recently was kind enough to send me, through Comm. Gus Schell, some photos of iceboating on Buckeye Lake in the early 20’s, obviously long before Mac’s daughter did likewise.  A couple are below.

Mac’s daughter also told me that Mac sold, for Kyle Armstrong, copies of Kyle’s book entitled THE HISTORY OF BUCKEYE LAKE.   She was kind enough to give me many volumes which Mac still had.  I have given them to the ladies to sell at the Club.  It is a paper bound book, which you may have seen, and describes the history of the entire lake.  It should be on the required reading list for anyone interested in the history of the lake and I urge you to buy a copy from the ladies at the Club and read it. 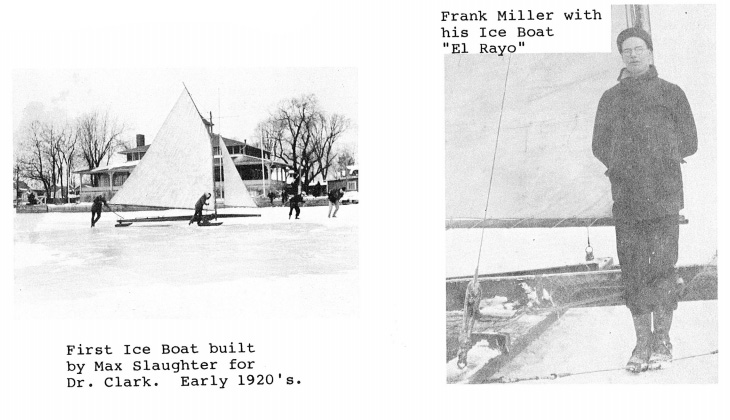 Editor’s Note: We recently uncovered the remaining copies of Commodore Armstrong’s book and have been selling copies to help fund the new Library & Lounge upstairs.  If you are interested in obtaining a copy, please contact P/C Steve Harris, Club Historian