There certainly is a lot of BLYC history around. I wish I had more time to capture more of it. I appreciate the help of those who have assisted me.

Commodore Alspach ordered the removal of some old locks from upstairs lockers and much to my great pleasure, we discovered an old envelope dated February, 1962 and addressed to Harold R. Miller. The envelope contained several photographs and I have send two of them to Gov. Kerr for publication in this Log. 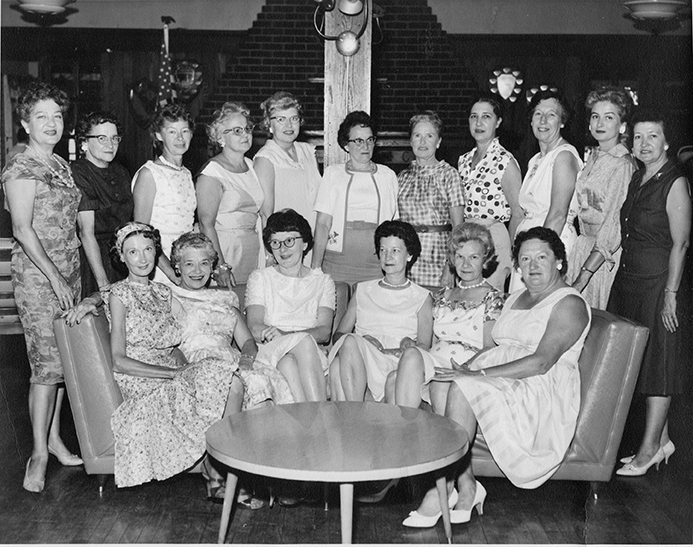 Ladies first.  There were five photographs of gatherings of past presidents of the Ladies Auxiliary. The one shown was probably taken about 25 years ago because it includes most of the past presidents through 1962 and none thereafter. Comm. Bob Dye named most of the people in these pictures with the significant help of his wife Doris and perhaps some others.  The ladies shown are as follows: BACK ROW, LEFT TO RIGHT – Gladys Lawrence, Marjorie Henery, Annabelle Johnson, Nora Ballenger, Martha Schell, Mary Davis, Lillian Wilson, Velma Lieberman, Ella Woolley, Doris Dye, and Dorothea Dum.  FRONT ROW, LEFT TO RIGHT – Doris Wolmendorf, Mary Miller, Helen Chase, Dorothy Slattery, Helen Corne, and Helen Dressel-Limes. 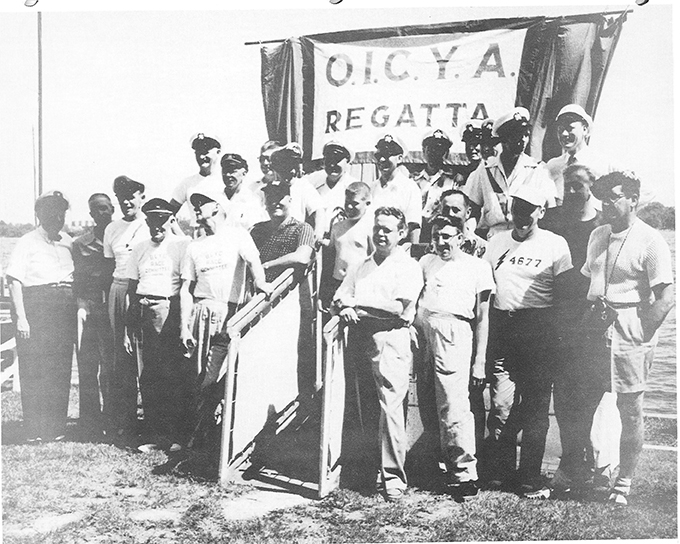 Another very interesting picture was obviously taken at an OICYA Regatta, perhaps about the same time. Comm. Dye gave me a list of names with only one missing.  Several of the individuals in this picture are familiar names to current BLYC members.  Perhaps they can tell me the missing name. I am particularly curious to find the exact date, if anyone recalls, and to know what the ramp is in the center of the picture holding up Comm. Dwight Haggard’s right arm. Perhaps this was many years later because Comm. Dye appears to have a star or bar on his hat. Please let me know. The names given to me by Comm. Dye appear to be left and right across the back and then across the front and are as follows: Ray Fisher, Norm Yoerger, Mel Dressel, Roy Francis, Kyle Armstrong, Ernie Wilson, ______, Gus Schell, Bob Mann, Newt Davis, Art Schwoerer, Dale Lawrence, Bob Dye, Charlie Dougherty, Park Chase, Earl Fisher, Gary Wilson, Dwight Haggard, Bob Slattery, John Camplel, Harold Miller, Pete Burns, and Dan Wolmendorf. Corrections of any mis-spellings of these names and other information would be appreciated.