Public notice of a meeting to form a club was given in late April, 1906.  Through the summer and fall of 1906, the Buckeye Lake Yacht Club was formed.  That winter, around January of 1907, a corporation was formed to sell 1,000 shares of stock at $5.00 each for the purpose of acquiring land and constructing a clubhouse.  Abou that same time the incorporators of the building corporation took over a lease on “sunken island” and a half lot on the lake’s main shore facing the island.  It was a spot of sometimes land with several half grown trees, mostly willows, surrounded by always shallow water and, especially in the spring, frequently flooded completely.  They envisioned that it could be raised and enlarged and the waters around it deepened.  It offered privacy because it was an island and was located only about 300 yards from the interurban railway.  Drawins of a beautiful building were prepared, and I have a copy of it and published it in an earlier log.  When the bids were opened, the building was too expensive and the club officers decided to confine their efforts to the bare necessities within their limited needs.  Bids were requested for a simpler building and a contract was awarded for $1,811.00.  Constrution began in early summer of 1907 and was completed in November.

This, it appears that this picture must have been taken between 1908 and 1912.  The picture looks north-easterly or east-northeast down toward our present Eastport facility.  Much as we do today, it appears that a group had gathered on the front porch and was watching the racing sailors.  Others were pursuing their activities.  From the appearance of the flags, the wind seems to have been at the same slow speed we often find now days.  As you can see “Sunken Island,” now Watkins Island, was raised and a seawall poured around it.  The island, in fact, was considerably more circular and smaller than now.  Since the porch was so close to the water they must have been able to hear pleasant sounds of the water slapping against boats, docks, and seawall.  Our new deck, adjacent the swimming pool on the west side of the island, may afford us an opportunity for the same pleasant sounds.

From the appearance of the shadows it must have been around mid-day, probably a Sunday.  Our lawn is certainly in much better shape now that it was then.

While the building is a neat, old building, I certainly am glad they later acquired a stronger financial position and built the current clubhouse.  They sure had the right idea for a good way to spend a Sunday afternoon. 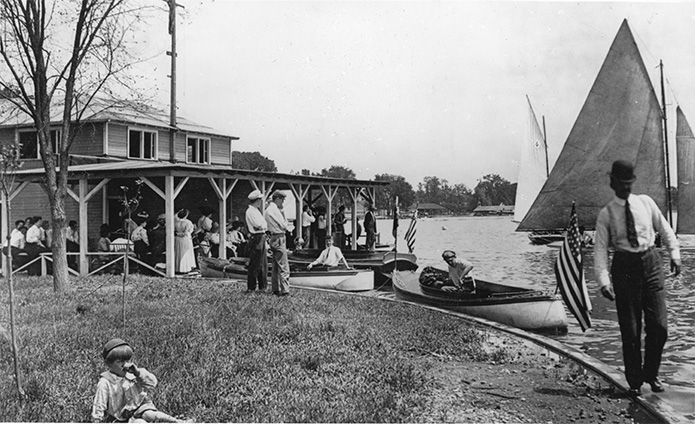 Hope to see you on the front porch this summer.

This picture has made the rounds throughout Buckeye Lake over the years.  In addition to being displayed at BLYC and the Buckeye Lake Museum, in 2012, the Buckeye Lake Brewery chose it as their logo picture for their renowned Irish Red beer.