“A new feature for power-boat events was application of a “bang-and-go-back” rule to the handicap race. Boats of all classes started together. Then upon a given signal, at an exactly predetermined time known only to the committee, all turned about and retraced their course to the starting-finishing line. To preclude any ‘crafty craftsmanship’, any boat returning in ‘any considerable time less than taken on the outward voyage’ was penalized.” 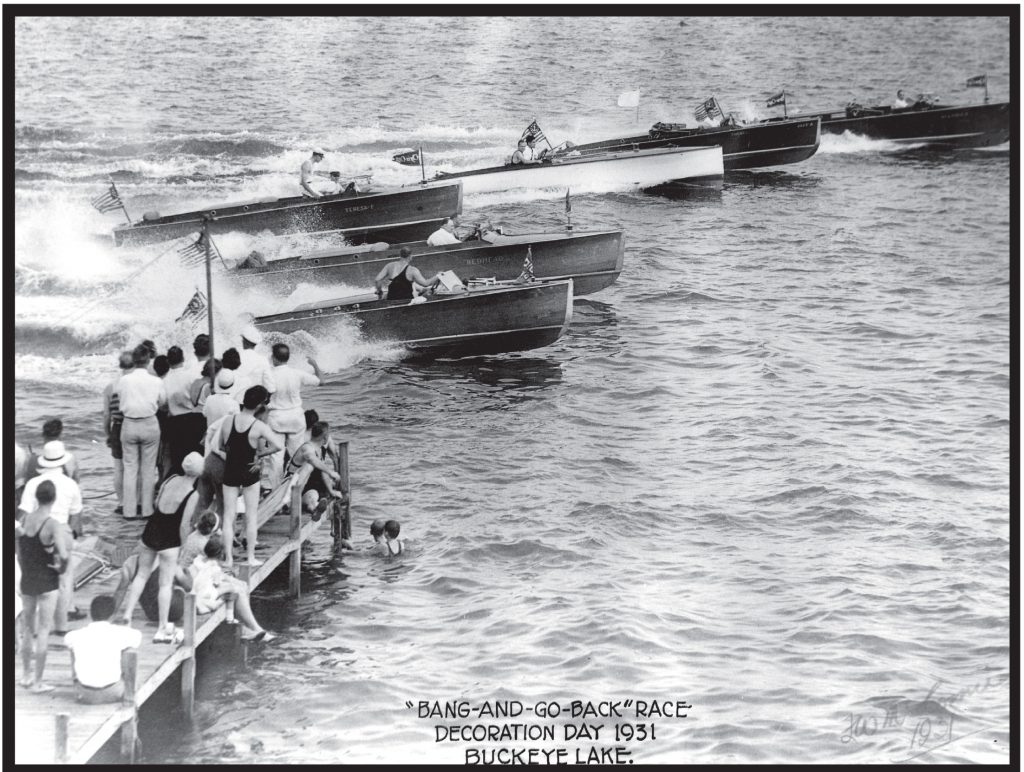 That is quoted from a description of the BLYC Memorial Day Regatta in 1912 by Comm. Armstrong in his History of BLYC. We also have a large photo of six, beautiful, wooden power boats crossing the line (apparently at the end of the dock in front of the club) in the 1931 Decoration Day “Bang and Go Back” race. It’s the November photo in our Centennial Calendar, created by Dwight Joseph.

But what was a “Bang and Go Back” race? I searched the internet and found that races of that name are still being raced, in one variation or another, in power boats, sailboats, rowing boats, kayaks, bicycles and horses and probably anything else that moves people. But no one says much about the rules, which must vary between the different things being raced and seem to vary from place to place. In fact there were inconsistent rule statements among the things I saw. I once asked Comm. Chris Lambrecht what the rules were. He may have been aboard one of the boats racing in the 1931 photo because he joined as a junior member in 1922. In fact both the guy sitting on top of the seat back and the guy on the starboard seat in the fourth boat from shore look like him. All he could recall was that it was some kind of predicted log race and on the second “bang” they went back. Like all racing, it had to be some kind of test of the boat operating skills of the skipper and crew.

In 1937, Comm. Lambrecht was Rear Commodore of BLYC and, thanks to his wife Margene, after he died I discovered a page of racing rules he prepared for the 1937 season. It describes the start signal sequence, points and other things but not the rules for the race itself. However, from Comm. Lambrecht’s and Comm. Armstrong’s comments and from the meager descriptions of such races on the web, here is what it sounds like to me. If you have more information, I would love to have it.

There is a running start at a pre-announced time just like in sailboat racing, so you need a clock or watch on board with the seconds indicated. Synchronize your watch with the race committee before going on board. You can’t cross the starting line before the start signal but you want to cross it as close as you can after the start signal.

According to one source, there must be at least two people on board a boat and I note that in the 1931 photo there are indeed two people in each boat. Of critical importance is that each skipper selects a boat speed (throttle setting) he wants and must not change that boat speed throughout the race. There are judges who disqualify a boat if they think it cheated by changing boat speed during the race. One source said that the decision of the judges is final, no protests. Obviously this race depends upon the honor, honesty and good sportsmanship of the contestants, which should be no problem with BLYC members.

From the starting line, all boats head toward a mark in the water or some landmark or on a given compass heading. At some clubs there is a mark to round and then proceed along another leg. There could be multiple legs.

Some time after the start, a cannon is fired and all boats turn to starboard, if clear of other boats, and return to the starting line. One source said it happens at a pre-announced time. But Comm. Armstrong says the time is known only to the race committee, making it a surprise. If he says it, that must be the BLYC way. How you hear the cannon over the engine roar I don’t know. Maybe you just see the smoke of the cannon. According to one source, the cannon is placed down the course. Another source suggests that a race committee boat leads the fleet and fires the cannon from its boat.

The winner is the first to cross the finish line, which was formerly the starting line, with second etc. places determined in the sequence of their finish. Obviously, boats that run at a higher speed move faster toward the finish but they also have gone farther at the time the “go back” cannon is fired to signal the return and therefore have farther to go back.

After the start, the skipper uses his skill in steering his boat along a straight line from one point to another or at least his skill in traveling the same path in both directions. If you cross the starting line just after the start signal, and you travel the identical straight line course in both directions, the return trip after the cannon will take the same amount of time as it took to go from the start to the cannon signaling you to “Go Back”, plus the time to turn around. If you also traveled the same speed, you can’t get back any quicker, unless you have wind or waves to help or you cheated. So, the skipper who starts the race by crossing the starting line first and immediately after the start signal, travels the course away from the start that was given by the race committee and steers the straightest course back will win.

To avoid what Comm. Armstrong called “crafty craftsmanship”, sandbagging is prohibited. Considering myself a little crafty, it occurred to me that, if the requirement was only to maintain the same boat speed, one could follow a curved longer course away from the line to shorten your distance back to the finish line. But that is sandbagging and will get you disqualified.

As you can see, the faster boats do not have an advantage. Consequently all power boats can race at the same time. In fact I suppose a sailboat or row boat could do it with its outboard. Also, you don’t need to go at top speed so safety is enhanced.

I hear from Gov. Don Day that he plans to hold a “Bang and Go Back” race this summer during our centennial celebration. That would be great. Perhaps we will have a group of members down on the docks watching, just like in the 1931 photo. Probably there will be more on the porch, like there surely must have been in 1931. In 1912, they were only about to start building the clubhouse so they must have been standing on the island, or the porch of the old “temporary” clubhouse.