Often we refer to the “towpath” as the site of the cottages and homes of many promnent and dedicated members of the Buckeye Lake Yacht Club.  But, why was it there?  The principal canal approached Buckeye Lake, then known as the Licking Reservoir or Licking Summit Reservoir Improvement, from the north at Sellers Point and went in a southwesterly arch through the lake to Millersport.  Its towpath is on modern charts of the lake and has caught many a sailing keel and powerboat prop.  From there the canal passed, I believe, southwesterly to Carroll and Lancaster.  So why this North Bank towpath?

Well, first of all it was really pary of the dam built to contain water.  The dam ends at the little lake by the old park.  However, the farmers of Thorn Township and around Thornville needed a “seaport” to transport their produe to market so they could get higher prices for it.  Thornport, the towpath passing north of the club, and a channel through the lake wer all created for that purpose.  The story is referred to in the 1883 edition of The History of Fairfield and Perry County.  It should be remembered that this book was published before George Watkins, for whom out island was named to whom the plaque on our chimney is dedicated, convinced the State of Ohio that the reservoir should become a public recreation area and before it was named Buckeye Lake. 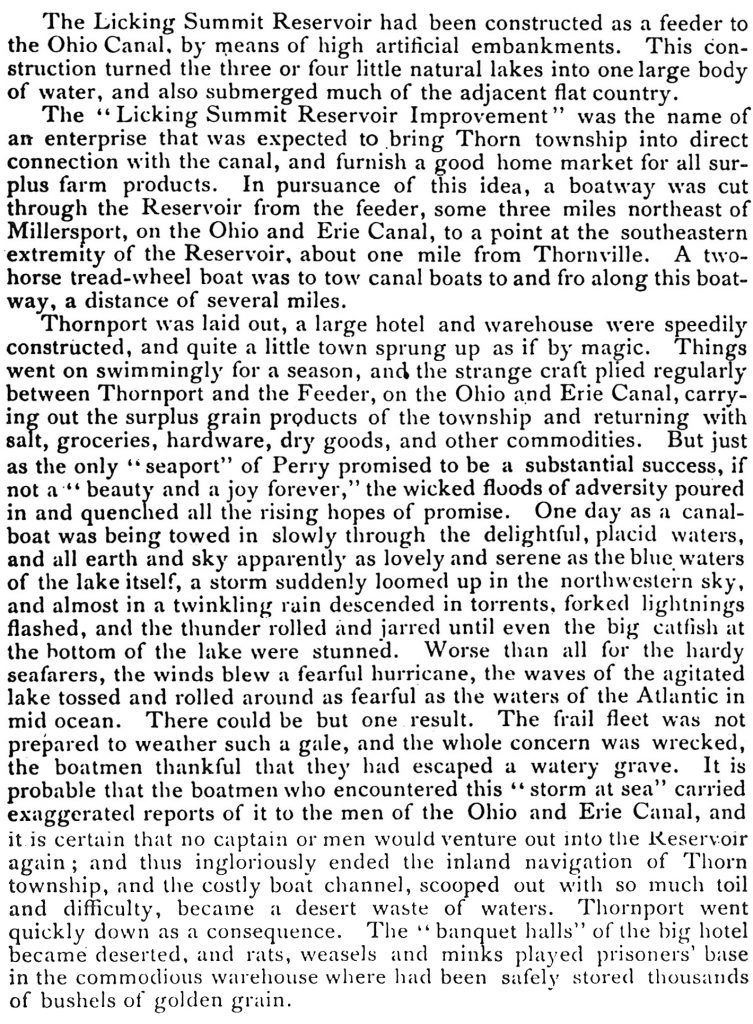 More information is given in The Story of Buckeye Lake by Joseph Simpson, published in 1912 (p. 17).

And at page 33 Simpson says:

But back to the North Bank tow path.  In The Story of Buckeye Lake the author says (p. 54) “Boats after leaving the canal at Minthorns (north of Sellers Point near where the canal meets the lake) had good towing one and one-half miles east, after which they took to the channel proper, amid stumps and logs before mentioned, and were propelled by the use of long poles.”

So after all this reading it becomes apparent that, yes, it really must have been a tow path along which the canal boats were towed from Seller’s Point to about our Eastport, passing at one point between the stone, North Bank wall and a high spot or bar once known as sunken island and later filled higher and called Watkins Island, the site of BLYC.  However, at the end of the dam, where the old park sits, they headed out into the lake by pol power to navigate between the stumps, not too much difference from the challenge of today’s sailboat racing.  Yes, Don Hardy, it appears that for a century and a half people have navigated from the site of BLYC out into Buckeye Lake hoping to avoid the stumps.  The names and people were different, but the game was the same.