Often, we focus our rules discussions only on Part 2 of the rules – “When Boats Meet.”  This winter, I plan to explore the rules of Part 3 – “Conduct of a Race.”  They may appear to only matter to the Race Committee, but they have significant importance to the racing sailor too.

As we saw in Rules 30.1 & 30.2, the penalties in Rule 30 get progressively more restrictive as we move through the rule.  Reminder, sailing is somewhat unique in that if you start early, you usually have an opportunity to correct your error.  But, when we get deeper into the rule, that is no longer the case…

“If flag U has been displayed, no part of a boat’s hull shall be in the triangle formed by the ends of the starting line and the first mark during the last minute before her starting signal. If a boat breaks this rule and is identified, she shall be disqualified without a hearing, but not if the race is restarted or resailed. “

Remember: Just as with the previous rules we’ve discussed, this rule changed slightly in 2021.  It used to refer to any part of the boat’s hull, crew, or equipment.  In order to clarify both the start and the finish, these definitions were changed to just the hull as it is easier to define and less potentially subjective.

Just as with Rule 30.1 and Rule 30.2, both of these rules apply to the last minute of the starting sequence.  It’s primary function is also to help the RC to control aggressive starts.  To invoke this rule, the RC will display Flag U in place of Flag P in the standard starting sequence (RRS 26)

This rule apply to the “triangle” that we discussed in the post on Rule 30.2… 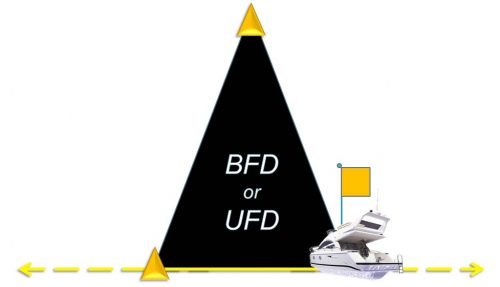 This rule apply to the “triangle” that we discussed in the post on Rule 30.2. Just as with the Z-Flag Rule, the RC is obligated to penalize any boats in the triangle in the last minute before the start.  The big difference now is that instead of a 20% penalty, a boat violating this rule is disqualifed and will be scored as “UFD” (U-Flag Disqualification).  Typically, this would be number of boats entered plus 1.

30.3 is rarely used for several reasons.  First, it is a fairly extreme penalty.  Typically, race committees start with 30.1 & maybe 30.2 before “escalating” to 30.3 & 30.4.  Secondly, it’s relatively new in the rules, first appearing in 2017, and many racing sailors (and some race officers) aren’t familiar with it and its use.  It was “tested” for several years prior to its official adoption, but mainly for high-level events. However, it is starting to become more common. With fleets that are known to be aggressive on the start line, it is becoming increasingly more frequent to attempt a start under the P-Flag and then immediately escalate to the U-Flag after the first general recall.  This may seem extreme, but it is also inherently unfair to the boats that start properly to have a seemingly never ending series of “practice starts” and general recalls – sailors come to race!

Then… there’s the Black Flag…

“If a black flag has been displayed, no part of a boat’s hull shall be in the triangle formed by the ends of the starting line and the first mark during the last minute before her starting signal. If a boat breaks this rule and is identified, she shall be disqualified without a hearing, even if the race is restarted or resailed, but not if it is postponed or abandoned before the starting signal. If a general recall is signaled or the race is abandoned after the starting signal, the race committee shall display her sail number before the next warning signal for that race, and if the race is restarted or resailed she shall not sail in it. If she does so, her disqualification shall not be excluded in calculating her series score. “

So… What’s the difference?

With the U-Flag, if the “race is restarted or resailed” the penalty goes away.  In other words, if there is a general recall or abandonment, no worries… No Harm, No Foul.

With the Black Flag Rule, this is definitely not the case…

“… she shall be disqualified without a hearing, even if the race is restarted or resailed…”

If the race committee elects to start under the black flag and there is a general recall or abandonment after the start, the penalty “sticks” (just as the 20% penalty in Rule 30.2 carries forward).  This requires a great deal of attentiveness and good record keeping on the part of the race committee, but it also makes the rule very effective… start properly, or you will be penalized.

Obviously, in a general recall, the race committee will not have been able to identify all boats that broke the rule.  But, if they identified any of them, they are required under the rule to penalize them.  (See WS Case #111)

“If a general recall is signaled or the race is abandoned after the starting signal, the race committee shall display her sail number before the next warning signal for that race…”

This sentence puts an additional requirement on the race committee.  Since the disqualification doesn’t go away if the race is called back, those boats that violated 30.4 in the first start are not eligible to start again.  But, they may or may not know they were guilty of breaking the rule.  Particularly in a general recall situation, its nearly impossible for boats to know where they were on the line.  The RC must notify them, so that they don’t start again.

“… and if the race is restarted or resailed she shall not sail in it. If she does so, her disqualification shall not be excluded in calculating her series score. “

So what if the “guilty” boat thinks the race committee got it wrong?

She can certainly request redress later.  However, what she cannot do is restart the race.  If the race committee has made all of the proper signals and notifications, she has knowingly violated this part of the rule.  If she starts anyway, her BFD (Black Flag Disqualification) becomes a DNE (Disqualification Not Excludable).  Her disqualification can no longer be discarded from her series score – It Sticks!… and it sticks hard.

Essentially, by restarting the race as an ineligible competitor, she will not be racing per the definition in the rules.  Therefore, she has no rights under Part 2 (“When Boats Meet”) over boats that are racing.  As such she is interfering with others.  At the very least, this is poor sportsmanship.

There are of course cases where boats have tried racing anyway because they believed that the race committee was wrong.  It never works out in their favor.  The proper action for them to have taken was to sit out the restart and file a request for redress after the day’s racing.  If they were found to be right and the RC indeed made an error, it is likely that they would be given redress by the jury (most likely average points of their other finishes).  However, once they violated the penultimate sentence of the rule, they broke the rule – regardless of the start that led to it.  (See WS Case #96)

Why Such a Harsh Penalty?

Believe it or not, the Black Flag Rule preceded the U-Flag Rule in the Racing Rules of Sailing.  Exactly how and when it came about is a matter of conjecture.  From my research, it first appeared some time in the 1970’s or 1980’s.  There are several stories out there as to how it came to be, but generally, most accounts involve a major championship in a very competitive class that was unable to get any races off due to very aggressive starts and an endless series of general recalls.  The rule was intended to be very severe.

Now that the U-Flag Rule is one of the tools available to race committees, the “nuclear option” of the Black-Flag Rule isn’t always necessary.  Some refer to the U-Flag Rule as “Black Flag Light.”  Essentially it does the same thing, just without the severity of 30.4.

Why Even Use the Black Flag?

Certainly, with all of the nuances in the rule, opting to use the black flag shouldn’t be an easy decision for the RC to make.  There’s a lot to keep track of, properly record, post, etc.  It shouldn’t be taken lightly.  When I was first assembling my race officer “go bag” with all the equipment needed to travel and run races as PRO, I didn’t even purchase a black flag – I honestly couldn’t imagine a situation that I’d use it.  That changed the first time I was PRO at a major Opti Championship.  Fortunately, the host club had a black flag in their RC gear – we needed it.  That evening, I returned to my housing, got on the computer and ordered my own.  There are situations that its necessary.  And, when used, it must be done correctly.

For a long time, though, I still considered it to be the “nuclear option” – a course of last resort only.  However, there are differing viewpoints on this and the “other side” has some very good points.  Several years back I was sitting with Olympic Sailing Gold Medalist Anna Tunnicliffe at a regatta banquet.  It was a youth regatta and she was the keynote speaker.  Having known Anna since she was a junior sailor and, being the PRO for the event, she and I were discussing her upcoming talk and she asked my opinion of topics that she might include.  This led to a discussion of starting penalties.  When I mentioned the Black Flag, her response was, “I LOVE the Black Flag!”  Confused that a competitor would say that, I queried why.  She said something to the effect that it gets the “posers” out of her way.  Those sailors who know how to start well, start well.  Those that don’t hang back.  In other words, the rule works.

Still, however, neither U or Black are a preparatory signal that you’re likely to see at a club-level event, or even at most larger regattas in our area.  But it’s always good to know how they work… just in case.

Remember Rule 29.1 – Individual Recall?
It included the following sentence at the end…

In the case of rules 30.3 & 30.4, there is no point in signaling an individual recall.  Boats violating this rule are already disqualified from the race.  There is nothing that they can do to change that fact.  The purpose of the individual recall is to allow boats to start properly.  On a start under P-Flag, I-Flag, or Z-Flag this is allowed.  Under U-Flag and the Black Flag, the result (disqualification) is already determined.  Restarting would be pointless.

Why not signal anyway so that the offending boats can “get out the way” of the other boats still racing?

Over the years, I’ve heard several answers to this question.  Honestly, I’m not sure that there’s a good one that most sailors would accept and appreciate.  The best answer that I have is that in a black flag start – particularly if there are boats that violate the rule – there’s already enough going on to ensure that everything was signaled properly, recorded and documented.  Adding another signal (Individual Recall) that is, now, essentially meaningless, only complicates things further for both the race committee and the competitors.

Next Week - Rule 28; Sailing the Race