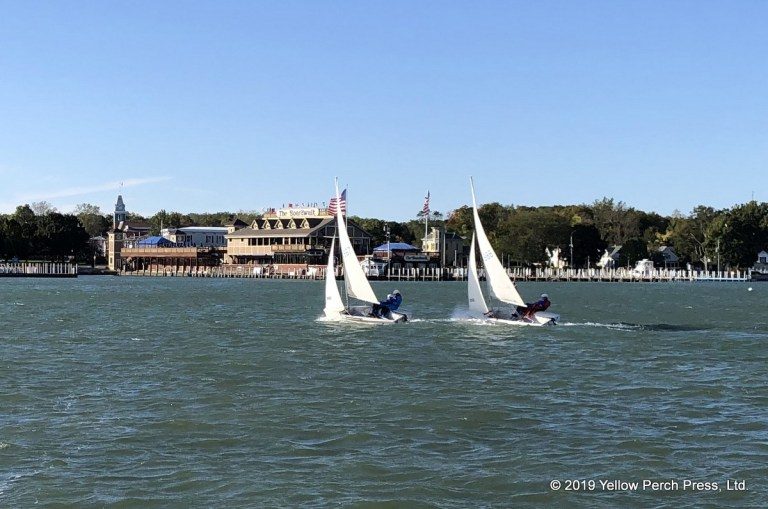 High School Sailing?  Yes, believe it or not, sailing is a competitive sport at the high school level here in Ohio.  Of course, it’s probably just up at Lake Erie, right?  Not at all!  In fact, there 8 registered schools here in central Ohio, and 18 total schools that participate in the Central Ohio High School Sailing program at Hoover Sailing Club.  Two of those schools – Westerville South and Olentangy Orange – competed this past weekend at the Put-in-Bay High School fall regatta at which I was fortunate to be the Principal Race Officer.  It was an exciting day.

Had you asked me on Thursday if I thought we’d be able to sail on Sunday, I would’ve likely said “no” (actually, I would probably have included a choice expletive).  The forecast was for winds in the high-teens, gusting in to the mid-20s.  Even sailing in the protected waters on the north side of the island, it didn’t look promising at all. 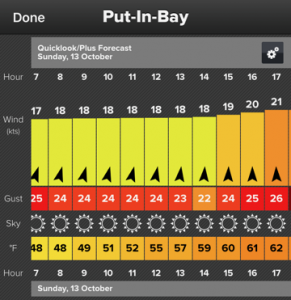 Full of optimism, I made the trek up to PIB on Saturday morning, got the committee boat rigged and hoped for the best.  In between beers and brats at the annual Put-in-Bay Oktoberfest on Saturday afternoon, I probably went down to the monument and checked the wind half a dozen times or more – generally low-teens, but gusting into the twenties, and the air temperature was low-50s at best.  We made the decision not to cancel and hope for the best.  NOAA issued a small craft advisory for Sunday, but we would be in the lee of the island… optimism at its best!

Our original plan was to sail by the monument.  Protected, but no good place to get the sailors in out of the cold between rotations.  As luck would have it, the cool, windy weather kept the transient boaters mostly away for the weekend as well.  As a result, the mooring filed by PIBYC was empty!  Have you ever raced sailboats through a mooring field before?  Neither had the sailors from the 7 teams who caught an early ferry over to race!  It was interesting to say the least.

With winds out of the southwest, we were in the lee of the island so waves were not a factor.  (I can only imagine the thoughts going through the sailors’ minds when they made the south passage to the island that morning on the ferry though!)  We got on the water early and were able to get four races off in each division – enough to make it an official regatta!  The winds were 10-15 all day with gusts as high as 22.  Being in the harbor, it was very shifty and very challenging.  But, even with a number of capsizes, the sailors demonstrated that they could handle it and they all sailed well. 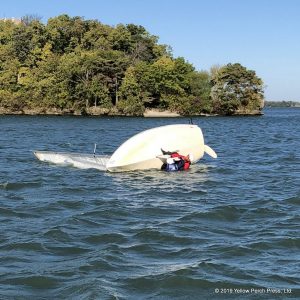 When all was said and done, the team from Put-in-Bay High School – in only its second season of existence – took top honors, followed by Olentangy Orange, and Beaumont (Cleveland Heights).  It was a good day and a wonderful way to finish out the 2019 season.