100 years ago, our Commodore was Harry Holbrook, an architect from Columbus. With the completion of the “new” Clubhouse in 1913, there were many changes as to its use in the 1914 season. Previously, not only had the overwhelming majority of Club functions been for “men only,” use of Watkins Island and the Clubhouse were likewise restricted. With the expansion into our current clubhouse, it was hardly reasonable to restrict its use to men only. The announcement of the 1914 Memorial Day Regatta included a plea from the house committee for increased utilization of the Clubhouse which “belongs to you and your families.” While once restricted to men only, much of the Clubhouse was now available for the Ladies’ use. BLYC was honored in 1914 to have its Past Commodore George Mooney elected to the office of Rear Commodore of I-LYA. That summer, along with BLYC’s Commodore and nine other members, he sailed his 60-foot yawl, Elsie, from Toledo to Put-in-Bay and back, participating in the Annual “Bay Week” Regatta.

Just after Commodore Chris Lambrecht assumed the helm of BLYC in the fall of 1938, the Buckeye Lake Building Company, which had existed 33 years and was responsible for the purchase and development of Watkins Island – including the Clubhouse – was dissolved. BLYC now owned its facilities and was “legally, entirely, and absolutely upon its own resources.” ON WENT THE FUN in Commodore Lambrecht’s year – as it should be, as that was the purpose of the Club. The year kicked-off with an “Old-fashioned Get-Together” Party in March followed by a “Stag Spring Frolic” in April. From May through September, the club hosted eight dances, at $1.00 per couple, culminating with the “Victory Party” in September when trophies for the season were awarded. Entertainment Chairman (and later Commodore in 1950) Mel Dressel certainly brought the fun to BLYC in ’39. The 1939 sailing season saw a decline in participation, but not due to lack of interest. Europe was at war, and although not yet formally a participant, the U.S. was engaged in a broad program of “preparedness” which included many of BLYC’s members being called to active duty in the Armed Forces, leaving them and their craft out of commission.

C. Kenneth Ross was Commodore of BLYC in the Club’s 58th year, 1964. There were continued improvements to the Club facilities and the summer calendar was again filled with activity. On the heels of his 1963 trip to the World Championships in Peru, P/C George Fisher (1958) continued to enjoy success on the race course, winning the 1964 BLYC Masters Cup and numerous other regattas. This year also saw the addition of one of BLYC’s favorite activities – The BLYC Gun Club. Started with just eight members in 1964, the Gun Club grew and for nearly 50 years gave members an enjoyable winter pastime at the Club. Unfortunately times change and public attitude and perception changes along with it. The BLYC was discontinued following the 2012 season amid increasing concerns regarding noise and environmental impacts. 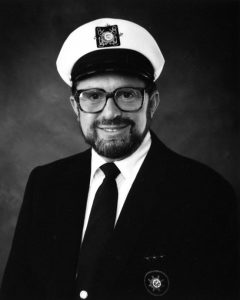 Like many members, 1989 Commodore Eddie Gaiser joined the club after a friend took him sailing and invited him to join. 1989 was a “typical” year for the Club with a full social schedule and plenty of sailing and boating activity. One of the more popular groups playing the Club in 1989? – The Majestics. The Junior Sailing program in 1989 was led by Governor P/C Frank Foster, III (1983). The schedule was full with 4 weeks of camp and regular races for the Juniors. The coach for the Junior Bay Week team was none other than multi-time National Champion P/C George Fisher (1958). That year, BLYC sent a team of 6 to I-LYA’s Junior Bay Week Regatta. Although they didn’t bring home any first place trophies, they represented BLYC well. Samantha Falter, who led that 1989 Junior Team as skipper of BLYC’s Thistle team is, like many former juniors, a BLYC member to this day. The following current members joined the Club in 1989 and celebrate 25 years of membership – Jim Crannell, P/C John Sproat (1996), John Lindsey, Ron Byers, Ross Fleming, Kevin Gorham, William Schmidt, William Baker, P/C Marque Debenport (1995), Evan Atkinson, and Justin Beck.

John Geiger began his term as 2004 Commodore with a strong effort to maintain the Club’s traditions with a renewed focus on fiscal responsibility and member service. As John put it, “Soon after becoming a member of the Board, you begin to recognize that the Club’s future is dependent upon a set of common compass settings – Respect for the BLYC’s history and traditions, the value of every member as a part of our BLYC family, the goal of financial stability, and the need to look to the future with the spirit of our founders had in 1906 when the Club was established.” Under Commodore Geiger’s leadership, the 2004 Board accomplished many tasks towards this goal. At the start of the year, Commodore Geiger reorganized the structure of the Board. “Race & Regatta” and “Junior Sailing” had long been combined into a single position. But, with increased activity in both these areas in the years leading up to 2004, they were divided into the separate positions that they are today. This also accomplished the task of dividing the Board responsibilities evenly between “member service” and “operations” areas.

There were a number of improvements to our Club facility planned for 2004 – a new entry to the Commodores Lounge, new carpet on the porch, and new landscaping on the island. We were fortunate that Paula Price, a Master Gardener, lent her talents and the BLYC Auxiliary generously donated the funds to conduct a complete tear-out and overhaul of the plantings on the island which had not been updated since the late 1980’s. Thanks to the efforts of many Club members, the new entry to the Commodores Lounge was completed at no labor cost to the Club. Under the leadership of Rear Commodore Mark Russell, the large umbrella at the pool was purchased and installed, providing much desired shade that was lost after the large tree on the east side of the Clubhouse had to be removed. The porch, however, was a much larger project than initially anticipated.

Upon further investigation, it was discovered that while the carpet indeed needed replaced, the railing and posts were rotten, the electric service was outdated and the underlying structure itself was unstable. Under the leadership of Vice Commodore Steve Harris, a complete re-build of the porch was undertaken – 16 new concrete support pilings under the Clubhouse, rebuilding the entire frame structure underneath, new decking as necessary, new posts and cornices built and donated by Ray Kent (Commodore 2007), new railings built to match the look of the original Clubhouse, new paint throughout thanks to the countless volunteer hours of Joe Campbell (Commodore 2008) and John Watson, new electric, new spouting, and, of course, new carpet. A large undertaking, but one that also came in over 40% under budget thanks to a concerted effort of both the Board and members.

2004 was also a good year for sailing, and Junior Sailing in particular. BLYC sent 9 sailors to I-LYA’s Junior Bay Week in 420’s, Lasers and Optimist Prams. Under the leadership of Governor Stone Parker, Vice Commodore Steve Harris, Director Tracey Davis, and coaches Nate Owen and Cameron Evans, our Juniors enjoyed much success throughout the season. Most significantly perhaps was that those coaching the team were, for the first time in many years, themselves products of BLYC’s Junior Sailing program.

Prepared by Commodore Steve Harris, BLYC Historian
For the BLYC Commodores Ball – May 10, 2014