I’m ready for summer! And, of course, summer at BLYC means fun times with friends at the pool. As we gear up for the Grand Opening Pool Party later this month, I thought it may be nice to share a bit of the history behind this great amenity the Club offers our members… it hasn’t always been this way.

Through most of BLYC’s history, if one wanted to swim, they did so in the lake, just to the west of Watkins Island. In fact, since the early days, there was a “swimming beach” there. I’ve been told that at one time, there was even a slide into the lake. It wasn’t until the late 1980’s that BLYC built a swimming pool and several years more before it came to completely have the “resort atmosphere” we now enjoy.

Recently, I was perusing some old files that Commodore Frank Foster gave me regarding the purchase of the Eastport property. In those files was a drawing showing proposed improvements to the property – tennis courts, a shower house facility, and, yes, a swimming pool. Now, don’t be fooled – the driving factor behind the purchase wasn’t recreation. It was parking. 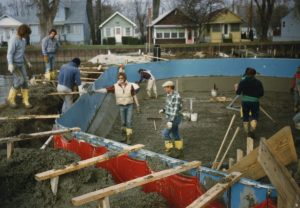 At that time, BLYC didn’t own our parking lot and, although we had a very good long-standing relationship with the owner, Alice Rosebraugh, she was getting along in years. We had been unable to purchase it from her and the future of that agreement was perhaps uncertain. A primary reason for purchasing Eastport was access and parking. It was a good “fallback plan.” Well, the pool and recreational facility at Eastport never happened but, in 1986 a committee was appointed to research building a pool on Watkins Island. Commodore Don White (1986) told me some years back that it was a contentious proposal and debate at the time. But the project proceeded and it has proven to be one of our greatest assets today. 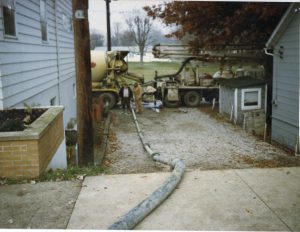 Financing a project as expensive as a swimming pool isn’t easy. In order to do so, the Club sought pledges for the purchase of notes by members. $30,000 would be needed. These notes would pay a dividend of 5% simple interest and were staggered in their maturation to allow the Club time to pay them back. Approved at the Semi-Annual Meeting in May, all $30,000 was collected by October and construction began on November 13, 1986. Much of the work was done by member volunteers and it was no easy task. The equipment used had to be brought over by bridge and concrete had to be pumped from the parking lot up and over the dam to the island. The bost hoist on the back of the island and the old playground were removed (Walter Grubb, then a small child, is still none to happy about that) 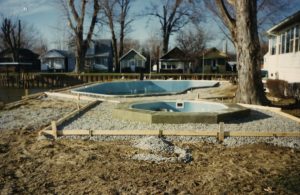 Substantially completed in March, the pool was ready to open for the 1987 season. One of the first events held at the new facility was the July meeting of the BLYC Auxiliary that summer. Of course, a pool needs restroom and shower facilities. The existing “Juniors Lounge” under the Clubhouse was eliminated and that area converted over to the current shower rooms in the summer of 1987. In 1992, the pool deck was added and pool furniture purchased for members to sunbathe. In 1993, the pool bar and grill was opened – but only on weekends.

Through the years, the pool and pool area have undergone a number of changes, additions, and improvements. For many years, as an example, there was a stately old maple tree along the west side of the Clubhouse. When the pool was constructed, this tree remained and later provided shade for the pool bar area. However, age took its toll and for the safety of both the Clubhouse and the pool, it was removed in 2002. Herb and Carolyn Caulder donated the awning over the pool bar and, in 2004, under the leadership of then Rear Commodore Mark Russell, the large umbrella was purchased and installed. Each year seems to bring new improvements, new ideas, and new ways that we can enjoy this great feature of BLYC.

See you at the Pool Memorial Day Weekend!