This month’s “history” article isn’t so much historical as it is perhaps educational.  Recently, several people have asked me about the flags that we fly on the yardarm in front of the Clubhouse.  While flying such flags at a yacht club is a tradition, how is one to learn what they mean and why they’re flown? 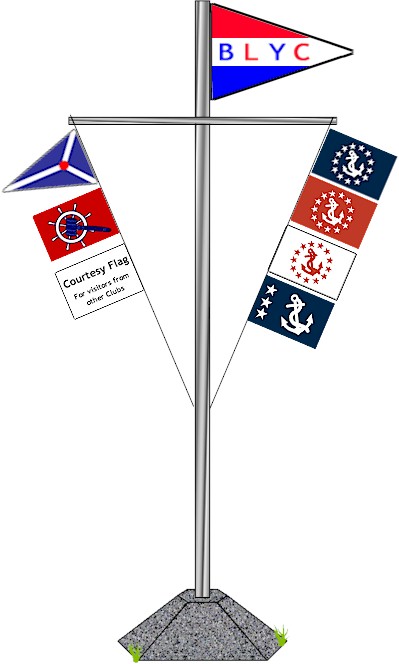 A bit of background…. A “yard” is a horizontal spar on a mast from which sails are set.  In the days of the old sailing ships, signal flags were hoisted on halyards (lines) off these yards, or yardarms, to communicate with other vessels.  Our yardarm at BLYC, like those found at yacht clubs all over the world, serves a similar purpose.

At the top of the yardarm on the “mast” flies our BLYC burgee.  This identifies our “ship,” our club.  Burgees are also flown on boats to identify the owner as a member of the club as well.

On sailing ships, officer flags are flown to indicate who the ranking officers are that are on board at the current time or which officer in the fleet is in command on that ship.  On the right halyard of our yardarm as you look from the porch towards the lake, we fly officer flags for the three “flag officers” of the Club – Commodore (white on blue), Vice Commodore (white on red), and Rear Commodore (red on white) – and one for our Past Commodores (3 stars and a fouled anchor; white on blue).  At some clubs these are flown only when those officers are present.  At BLYC, we usually fly them all the time to show respect for those officers.

On the left side of the yard arm as you will find flags indicating our Club’s affiliations with other organizations.  In the top-most spot on that side, we fly the burgee of the Inter-Lake Yachting Association, our regional sailing & boating organization in this area.  Below that, we fly a pennant bearing the logo of US Sailing – the national governing body for the sport of sailing – of which we are also a member.  Finally, we fly the burgee of the International Order of the Blue Gavel, an association of Past Commodores of Yacht Clubs.

Often, Clubs will also have a “courtesy” spot on their yardarm from which they may fly the burgee of another club when someone from that Club is visiting.

If one looks around the Clubhouse, there are plenty of other flags and Yacht Club traditions that probably could stand to be explained too.  I’ll have to look around for topic ideas for future articles…