What you need is a good map to find your way around Buckeye Lake.  Unfortunately, you probably better not use this one.  It doesn’t say on it when it was drawn, but the drawing of the yacht club as a character identified as “Commodore Charlie Fast.”  Since Charles Fast was Commodore in 1928, this was probably drawn around that time. 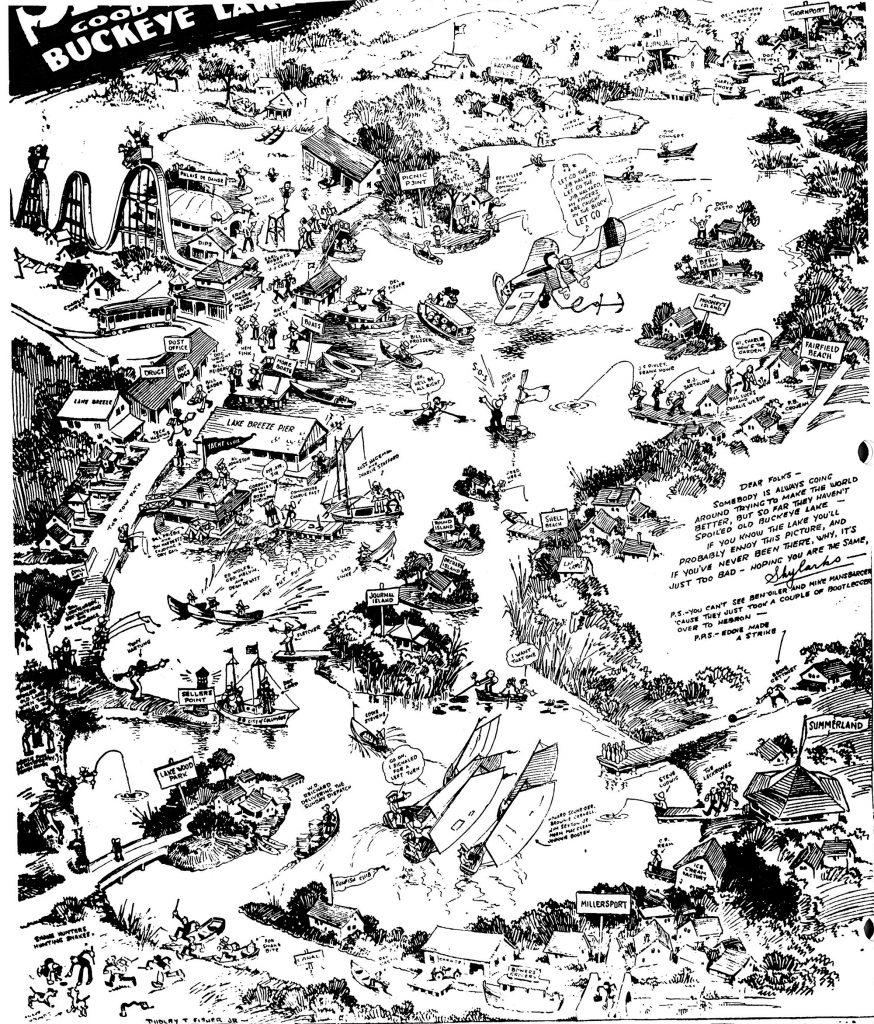 Unfortunately, this scan is poor quality and the original has not yet been located in the physical archives.  However, some names and physical locations can be easily discerned.  While all of these people and places were obviously significant to the Buckeye Lake Community at the time, many are perhaps still familiar to us today.  (SGH 1/2017)

Charlie Fast – BLYC Commodore, 1928
Gordon Brawley – BLYC Commodore, 1929
Bill Frisbee – BLYC Commodore, 1918-19
Ed Wolfe – BLYC Commodore, 1934; I-LYA Commodore, 1937
Dean DeWitt – BLYC member in the 30’s; often raced powerboats with Ed Wolfe
Doc Lord – Dr. Sidney Lord; BLYC Commodore, 1930
City of Columbus – Commodore Lord’s ketch; nearly 70′ in length
“Snakehunters” hunting snakes – Snakehunter was a (perhaps derogatory) term from the canal days that referred to the locals – including thieves and prostitutes – who had taken up residence along the canal route and in canal towns.
Dudley T. Fisher, Jr. – Although Fisher’s Marina as we know it today didn’t really come into existence until the 1940’s, “Fisher’s Beach” proceeded it in the same location as early as 1912. Given the location indicated on the map, was this the location of “Fisher’s Beach?”
Bowers Grocery Boat – This appears to be near the same location as the current Bower’s Meats in Millersport
Brownie Cornell – Charles B. Cornell; BLYC Commodore, 1924; Columbus water engineer responsible for the construction of the O’Shaunessey & Hoover Dams.
Ice Cream Factory – Weldon’s Ice Cream Factory?
Summerland – Perhaps a dance hall in this time (?), this building still exists and is the main assembly hall at the Apostolic Campgrounds in Millersport today.
Eddie Gettrost – BLYC Commodore, 1925; Owner of several large bowling alleys in Columbus at this time.
Harbor Hills – same location as today
Harry Freeman – BLYC’s 5th Commodore, 1912-13; Commodore Freeman developed Harbor Hills and Freeman Island and Freeman Memorial Drive are believed to be named for him.


Are there others you can identify?