I want to thank the RC for the great job they did, the crowd of spectators that gathered in the RC shack for their support and our team which consisted of Bill Collinson, our first-time racer Ed Romito and myself.  I also want to commend both Alex Fischer and Chuck Bendig who single-handed all three races as they are both tough competitors.  A big congrats to Chuck with his O’Day 26 Big Girl on winning the coveted Rabbit Flag. 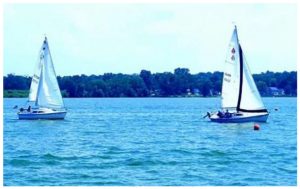 FINALLY, after 6 weeks of races being cancelled because of no wind we were able to get back out on the race course.  We had steady SW wind at the start line and our strategy was to hug the line and cross on port tack. We did okay and were about 15 seconds behind the O’Day 26. We held our port tack all the way to the north bank and with a few good lifts we were hoping it was enough to round the windward mark w/o any additional tacks; but the wind shifts and lifts would not cooperate and we ended up asking for Rule 18 rights (3 boat rule) from the Catalina 22 to round the mark. We ended up having to duck her stern at the last moment to avoid contact (I really owe Alex a few barley-pops on that one) and rounded in third position. We made up the distance with good sail trim and rounded the leeward mark for a second position but corrected out to a third place finish. Second race, we were the same strategy for our start but, with a wind shift while in our start sequence, we were forced to start on starboard. We were again a little late, but seemed to make up good position and held this all the way around the course.

Third race we had to take a DNS as our team had prior commitments so we put the boat away while the race was going on.